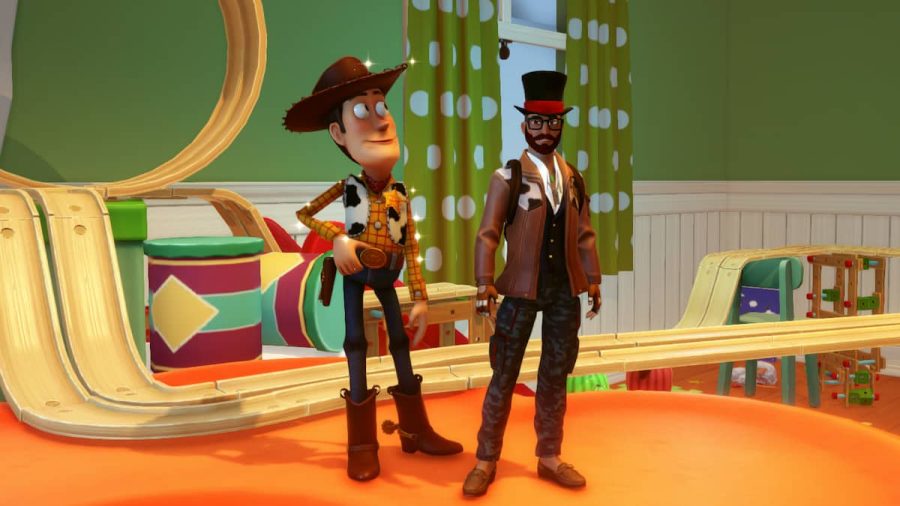 After visiting the Toy Story realm, players will first invite Buzz Lightyear to the village. This unlocks the You're My Favorite Deputy quest, bringing Woody to Dreamlight Valley. Travel to the Toy Story realm after setting up Buzz in the village and interacting with Woody. He tasks players with rebuilding Bonnie's farm, and for this, you will need Ice Pop Sticks and Pipe Cleaners.

Ice Pop Sticks can be acquired using the shovel tool on the white trash crusts. Check the first image above to see how they look in-game. Similarly, Pipe Cleaners can be acquired using the pickaxe tool on the lollipops as shown in the second image. Players need to collect eight Ice Pop Sticks and five Pipe Cleaners. Hand them over to Woody, and he asks players to get Yellow Daisies and an item to keep things fixed.

Return to the valley and interact with Buzz Lightyear to get the Adhesive Glue. Visit the Peaceful Meadows biome to collect two Yellow Daisies. Go back to the Toy Story realm with both items, and give them to Woody. Woody rebuilds the farm and gives players another task.

Related: How to get the Miracle Growth Elixir in Disney Dreamlight Valley

After rebuilding the farm, Woody asks players to find five origami animals in the Toy Story realm. You will find two blue elephants, one green turtle, one pink butterfly, and one penguin. The elephants are located right in front of the main door. The turtle is inside the white closet. The penguin is behind the wooden oven, and the butterfly is on the farm's right side.

Collect them and hand it over to Woody, after which he accepts the invitation to join the valley. Return to the valley, and place Woody's Carousel at an open spot. Interact with the Scrooge McDuck sign near the construction, and pay 10,000 Star Coins to build Woody's house. Once that's done, you must welcome Woody and interact with him to complete the You're My Favorite Deputy quest in Disney Dreamlight Valley.

Wondering how to invite Buzz Lightyear to the valley? Check out How to get to the Toy Story realm in Disney Dreamlight Valley on Pro Game Guides.

How to Unlock Woody in Disney Dreamlight Valley