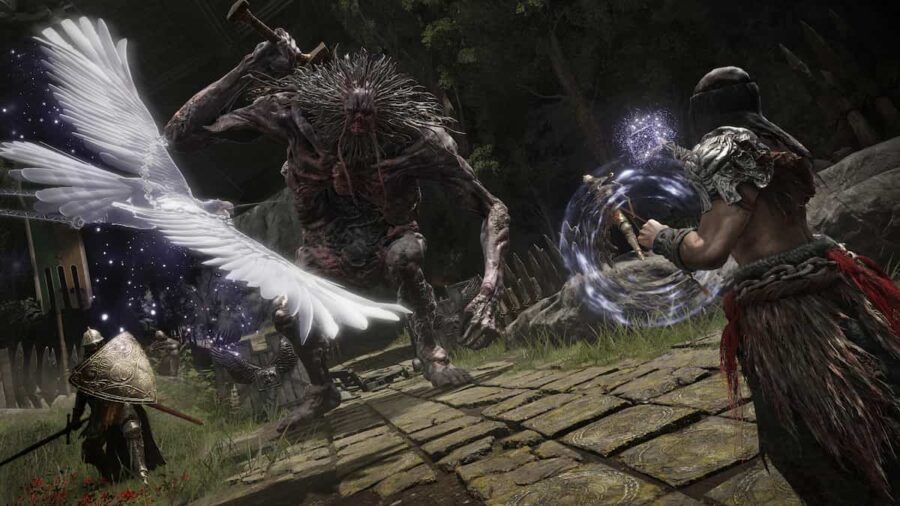 At long last, Elden Ring gameplay was revealed during the Summer Game Fest 2021. The trailer showed many iconic FromSoftware elements from crushing bosses, Sekiro-esque swordplay, and fearsome dragons. We were also treated to a brief glimpse of multiplayer, and it looks similar to many games in the developer's impressive catalog.

Multiplayer and co-op are confirmed for Elden Ring. The trailer depicted the player holding some kind of object in their hand before it glowed and summoned two additional players, both of which shone a bright hue from head to toe. Immediately, all the players sprung into battle against a challenging enemy.

The developers also confirmed online play on the Elden Ring Bandai Namco website. One of the descriptions state: "Traverse the breathtaking world on foot or on horseback, alone or online with players." So there you have it, folks, online play is confirmed for Elden Ring, presumably with up to four players in one world.

Details beyond the above are unknown, but the game's description appears to imply that the game can be played cooperatively across the entire experience. FromSoftware isn't shy when it comes to multiplayer, with summoning appearing in the Souls series and Bloodborne, but online play is typically used to aid a player against a boss or to raid another's world and slaughter them.

Elden Ring, however, is going to be massive. The open world is confirmed to be expansive, with interconnected environments and dungeons designed on a much larger scale than previous FromSoftware entries. With such a daunting world pitted against one player, it might be wise to travel in a party.

FromSoftware's latest places players in the shoes of the Tarnished, who must rise as an Elden Lord by brandishing the power of the Elden Ring and put an end to the ware in the Lands Between. Elden Ring releases on January 21, 2022 and is available on multiple platforms.

For more on Elden Ring, be sure to check back with Pro Game Guides.

Does Elden Ring have an open world?

What Consoles will Elden Ring Release On?