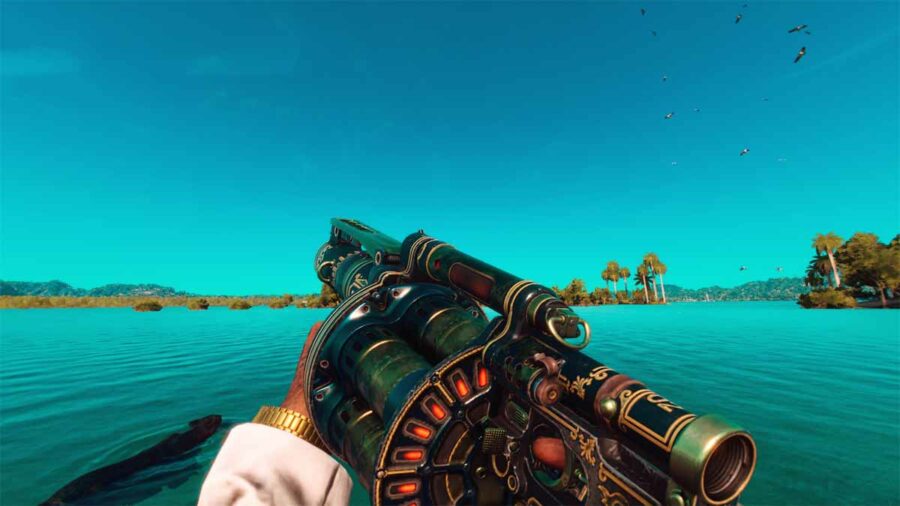 El Caballero is one of the best and most sought-after Launcher weapons in Far Cry 6. It is a Unique Grenade Launcher and can be devastating against the annoying and difficult to get rid of vehicles. You can easily destroy enemy cars, helicopters, and even tanks with it.

Although destroying a tank can be a bit tricky, it does the job better than most of the other weapons in the game. To unlock El Caballero, you should first visit the location shown on the map below.

The blue cursor in the center of the map highlights the pinpoint location to find the aforementioned Unique Weapon. The Far Cry 6 map Yara's highlighted region is Aguas Lindas, situated in the Madrugada province.

You can unlock the weapon by infiltrating the FND base, F.I. Escudo Steel Plant. The mission requires you to eliminate a few soldiers and capture the base. You can also do this mission without being chaotic, but you will have to kill the commander to grab the key to the locked room.

After you liberate the said FND base, look for a locked stash room just like the one shown in the image below. Unlock the room and open the weapon crate to get the weapon. If you don't have the key even after the mission is over, you'll have to look for it in one of the warehouses/rooms in the compound.

Here are the features of El Caballero Unique Grenade Launcher:

To unlock the Into Orbit Unique Rocket Launcher, check out Where to find Liquid Courage Treasure Hunt in Far Cry 6 on Pro Game Guides.