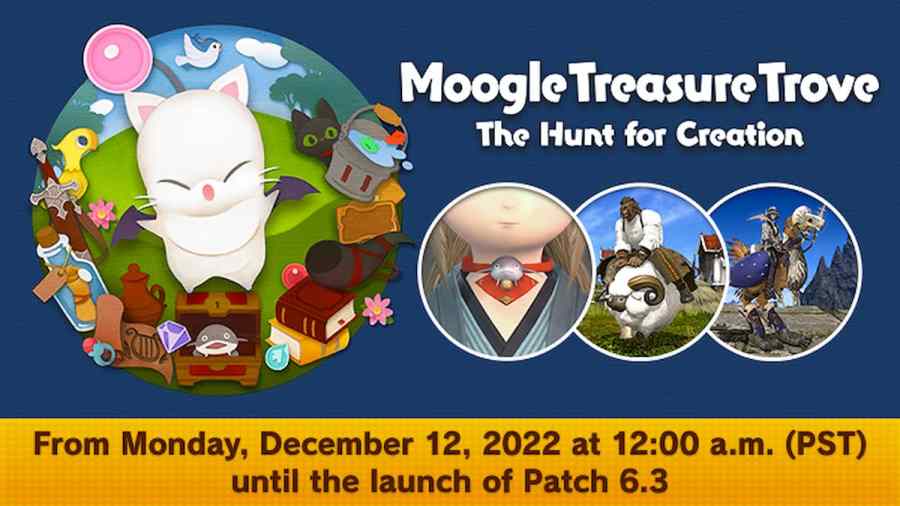 With the patch not until next year, and players eagerly awaiting new content, Final Fantasy XIV has released its latest Moogle Treasure Trove event. Entitled Moogle Treasure Trove The Hunt for Creation, the latest filler event will run from December 12, 2022, at 12:00am PT until the launch of Patch 6.3. The event was announced on Final Fantasy XIV’s official Twitter earlier today.

Patch 6.3, in January, gives you an entire holiday season to unlock the new Irregular Tomestones of Creation. You’ll unlock these Tomestones by completing various duties, ranging from seven for the longest duties down to just a pair for some of the more recent trials.

In return, you can trade Irregular Tomestones of Creation for a variety of items. These include the exclusive Namazu Neckerchief, which is exclusive to this event, and some rare mounts, such as the Hallowed Kamuy Fife, which is usually tied to the Stormblood Extreme Trials. There’s also Ostensibly Special Time Worn maps, which will allow you to easily grind some of the most sought-after items in the game thanks to Treasure Map searches.

But perhaps most attractive is the delightful unfashionable Spotted Fedora and Spotted Spencer jacket. These two glamour items are usually only unlockable from a rare FATE series in the Dravanian Forelands. But with the Moogle Treasure Trove event, they’re available in perhaps the easiest way they’ve ever been.

As mentioned, the event runs from December 12, but the closing date is unknown. This is because we don’t have a hard date for the release of Patch 6.3, although it's projected to be in January. As a result, it's best to quickly grind these Tomestones during the holiday season so you won’t miss out on any items you want. Good luck grinding!

For more Final Fantasy XIV news, guides, and info, check out How to make a mouseover heal macro in FFXIV – mouse over healing guide on Pro Game Guides.