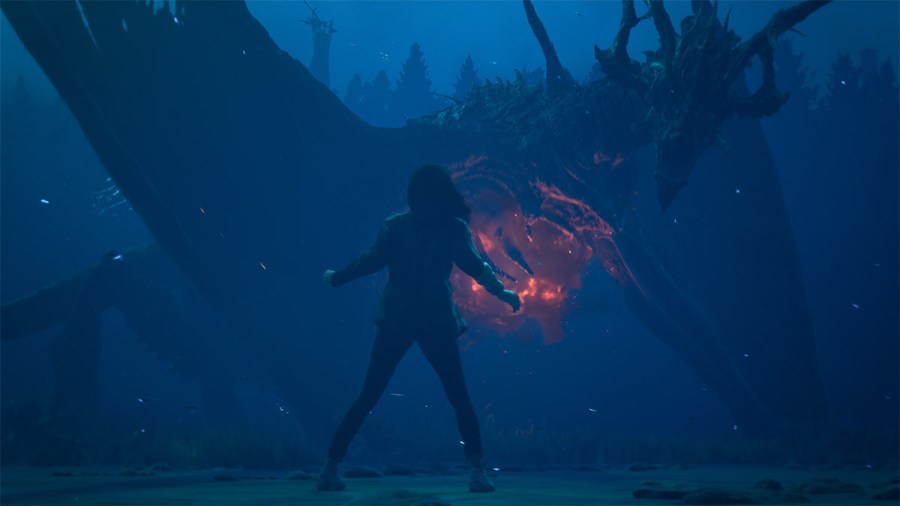 After taking down the Chapalania, you'll experience your first major boss fight in Forspoken. You will face the Dragon, described as a "black serpent seen darkening the skies all over Athia." Here's a quick guide on whether you can defeat the Dragon, and if you can, then how.

Can you defeat the Dragon first try in Forspoken?

When the Dragon appears out of nowhere, you're left with no choice but to fight it in the enclosed arena. Defeating it is pretty easy, given you keep moving swiftly and try to attack it where it's vulnerable, i.e., its burning chest. During the initial duration of the combat, use your Attack Magic (RT) and Support Magic (LT) to deal damage to the beast. You can also combine both to activate the Surge Magic (LT + RT) when both abilities are fully charged.

After a while, the Dragon will start using its fire breath that you can dodge by standing behind a wall or running around in circles using the Magic Parkour (B + Left-stick). Once you deplete the Dragon's health bar to zero, a cutscene will appear, and you'll leave it behind.

Related: How to heal in Forspoken

However, the fight is far from over. As you climb to the other side of the wall as directed, the Dragon will reappear out of nowhere and be ready for combat. This time the creature will fight you with even more powerful abilities and magic of his. You must listen to your cuff/vambrace for cues and keep dodging the Dragon's attacks. Interestingly, it doesn't matter if you defeat the Dragon or not, the outcome will be the same. You'll go through a cutscene where the beast carries you, and you eventually reach Cipal. Therefore, you can simply let go of your controller if you're in a hurry to finish the Forspoken storyline.

Stay tuned to Pro Game Guides for more Forspoken content. In the meantime, head over to our article on How to get Nuggets in Forspoken.

How to defeat the Dragon in Forspoken