Fortnite and Avengers are coming together for an Infinity War crossover limited-time event! Learn all there is to know about this Avengers + Fortnite event and all about the Infinity Gauntlet that you will be able to find!

If you've been playing Fortnite then you'll kind of have an idea on how this event is going to work. This is a LIMITED TIME mode, which means it will likely last a week (could be longer, we'll see). We've had a lot of different types of events in the past, like Snipers, 50v50, Blitz Mode and more. These events allow Epic to experiment with different ways to play the game, as well as freshen up the game if you've grown a bit bored of the same old battle royale game.

According to the exclusive post by Entertainment Weekly the event is going to be a standard game of Fortnite with one big twist! You will be able to find the Infinity Gauntlet that features all six Infinity Stones! It will appear on the map, and whoever finds it and equips it will transform into Thanos and have the power of the gauntlet!

It turns out that the co-directors of Avengers: Infinity War were fans of Fortnite so they contacted the director of Epic Games and brainstormed some ideas on how they could work together:

“Out of the blue, I get this call from Joe. And after a bit of geeking out over each other’s work, we start brainstorming these crazy ideas,” Mustard recalled. “It was really important that whatever we did, it had to be super authentic to both Fortnite and the Avengers: Infinity War, and something that fans of both would be excited about. About an hour later, we had the bones of this awesome idea for a limited time gameplay mode, and almost immediately our team got started.” 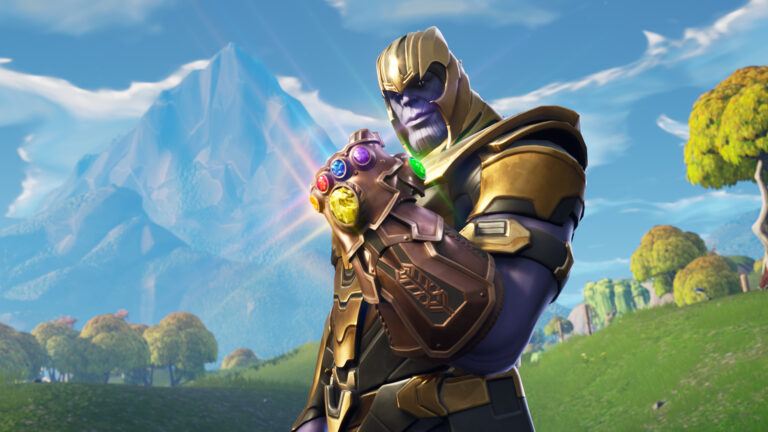 Are there going to be Marvel Avenger Skins in Fortnite?

Unfortunately it looks there are no current plans to have Avenger skins in Fortnite any time soon. An Epic employee responded on Reddit answering the very popular question:

rq just because I've seen lots of folks asking, we have no plans for Avengers outfits in the store. - Source

Why aren't they doing it? I'm sure there would be a very good reason because these would obviously sell like hotcakes. Most likely to do with licensing or copyright etc.

This stuff is directly from Epic, but I will add any extra stuff if they missed anything interesting.

Looks like Epic has decided to nerf Thanos a bit, they posted the following hotfix information on Reddit:

We’ve just pushed a hotfix that will make the following changes to Thanos in the new Infinity Gauntlet Limited Time Mashup:

Good luck and have fun!

Thanos gets four different powers available to him when you grab the Infinity Gauntlet:

Your abilities do not appear to have a cooldown, so they can used repeatedly.

Let's take a brief look at how to do well in this Fortnite + Avengers based limited time mode! We haven't gotten a chance to play it yet, but these are some tips to think about before queuing up for the event.

Get the Daredevil skin for free by competing in the Fortnite Daredevil Cup!

Fortnite Wolverine Challenges – How to get Wolverine!