Our Fortnite Season 9 Secret Battle Stars Locations Guide features an up-to-date list of every week available to find those hidden stars! We will be featuring all of the loading screens ahead of the release, so you'll know exactly where to go when you finish up your challenges for the week. You'll want to bookmark this page so you know exactly where each star is located.

What's up with these secret battle stars? Well, it all started in season 4 where you could unlock a loading screen whenever you completed all of that week's challenges. Some eagle eyed player noticed the outline of a battle star in one of the loading screens. They went to the location and low and behold there was a star that they could collect! In one of the following seasons, they added hidden banners that can be found as well. In Season 9, however, they've gotten rid of hidden banners and feature Fortbytes instead.

Once you collect one of the hidden battle stars you are given 10 stars towards your battle pass. This is helpful for leveling it up quickly and unlocking all of those awesome cosmetics you paid to get.

What happened to the hidden banners?

It appears that Epic decided to remove hidden banners and replaced them with Fortbytes. In the past, it would go back and forth between a hidden battle star and banner. Now, we still get a hidden battle star every other week, but the banners have been removed. It is unclear how this will work going forward!

The big question on everyone's mind when the new season hits is what will be the hidden skin for the battle pass! It has been in the past that you need to complete challenges to unlock them, but this time you'll need to collect Fortbytes. To learn more about those, check out our Fortbyte Locations Guide.

Check out our big post with guides to every challenge week of Season 9: Fortnite Season 9 Guide!

Once you complete week 1 of the battle pass, you will receive the following loading screen that features a look at the new Raptor female skin that has been leaked called Velocity! She's using a Minigun to take down her enemies, and if you look closely at it you'll see some coordinates to our first battle star! It says I5, I6, J5, J6 which combine to put you just south of Lonely Lodge. 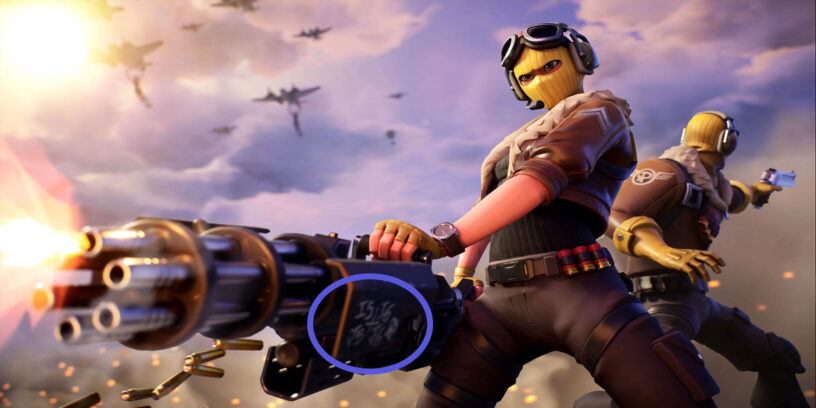 I've marked the exact location on the map below!

Here's a look at the star location in-game: 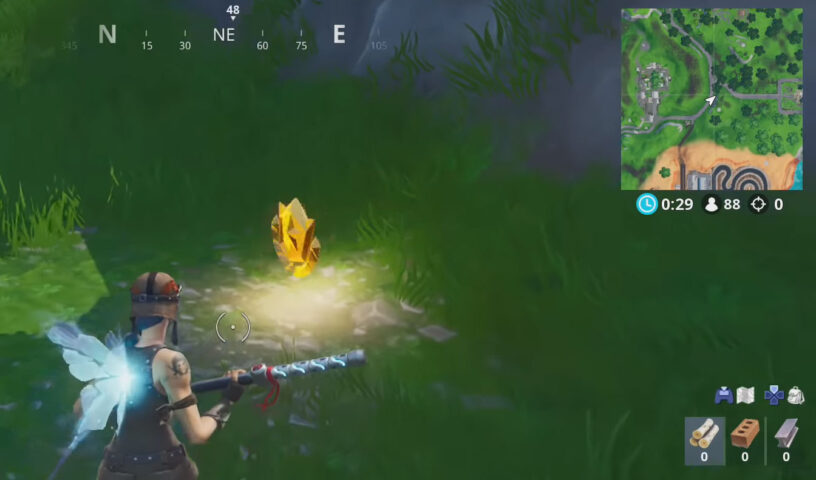 There's no hidden banners to be found in Season 9 of the Battle Pass, instead there's Fortbytes. The clue for the location is in the description of the loading screen: "Last seen battling at Dino Park outhouse, these two can’t be stopped." This can be found south of Paradise Palms.

Fortbyte 13: Found at a location hidden within Loading Screen #2

This is under a Port-a-Potty in the desert biome south of Paradise Palms. Crack open that Port-a-Potty, and you will find #13 inside. 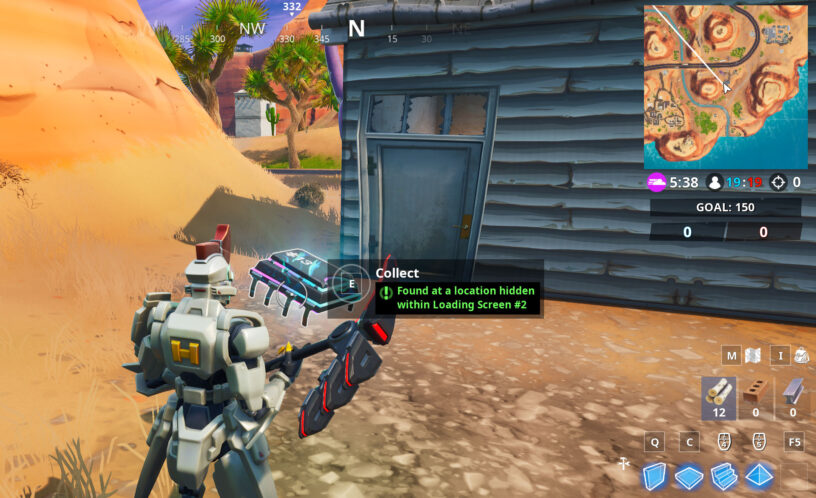 Once you've completed all the challenges in week 3 of the Season 9 Battle Pass you will unlock this loading screen! It appears we'll be getting a new DOGGO skin in the item shop, so you can look forward to that. If you take a look at some of the graffiti that's been sprayed on the cement, you'll see the drawing of a Battle Star. The location is over near Junk Junction. 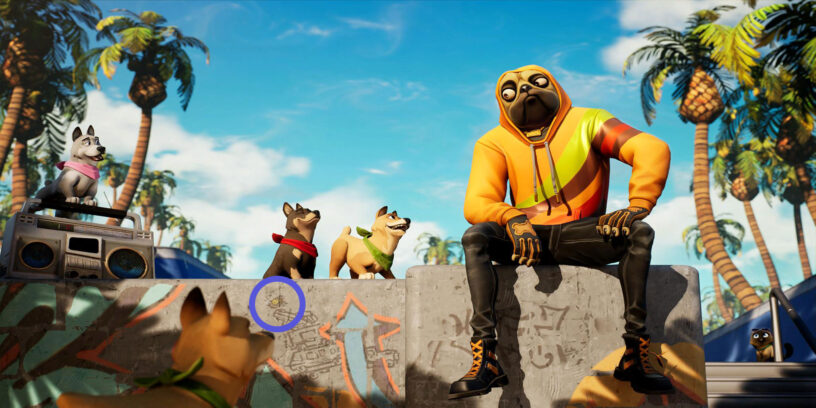 Just south of Junk Junction on the road is a a truck with a stack of different vehicles on it. There's a chest spawn here, and you'll also find the hidden Battle Star for the week!

Here's a look at the battle star in-game: 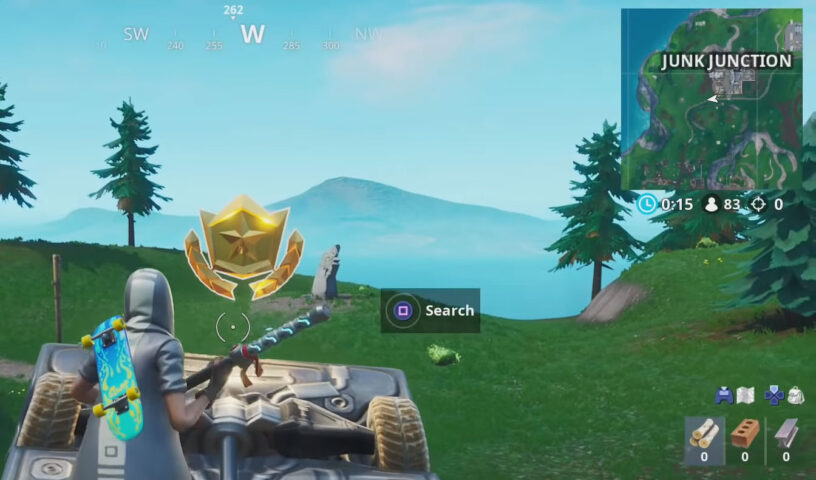 This Fortbyte's clue is in the DESCRIPTION of week 4's Loading Screen that you can earn by completing four weeks of challenges. Here's a look at the loading screen:

Head to the ATM and you should find yourself a Fortbyte! You might need to break down the ATM to retrieve it. 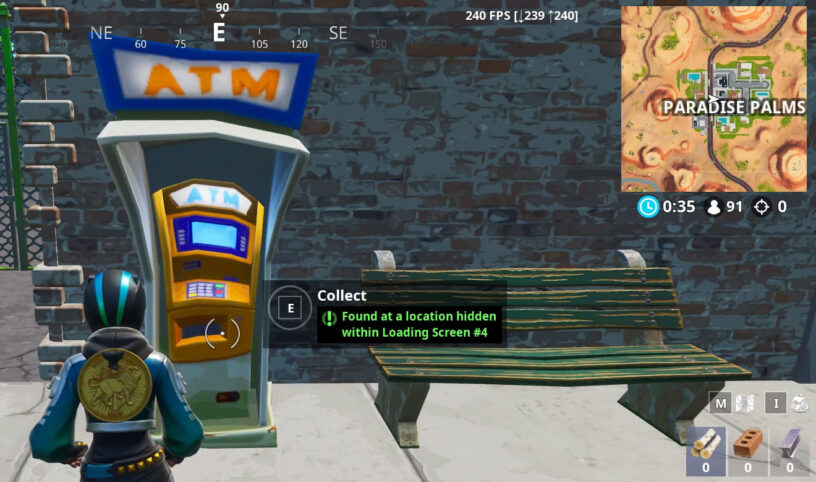 Once you complete all the challenges, you'll get the following purpled out loading screen with what appears to be a sweet new skin on the way! Located on the Slipstream, you'll see some coordinates: B2, B3, C2, C3. If you head to that exact spot on the map, you'll find the battle star for the week! 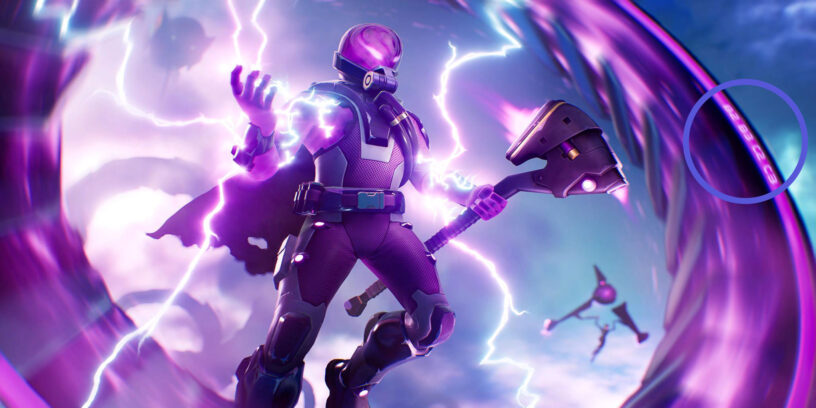 The exact location is east of Haunted Hills, up on the mountain near the old broken down castle!

Here's a look at the star in-game: 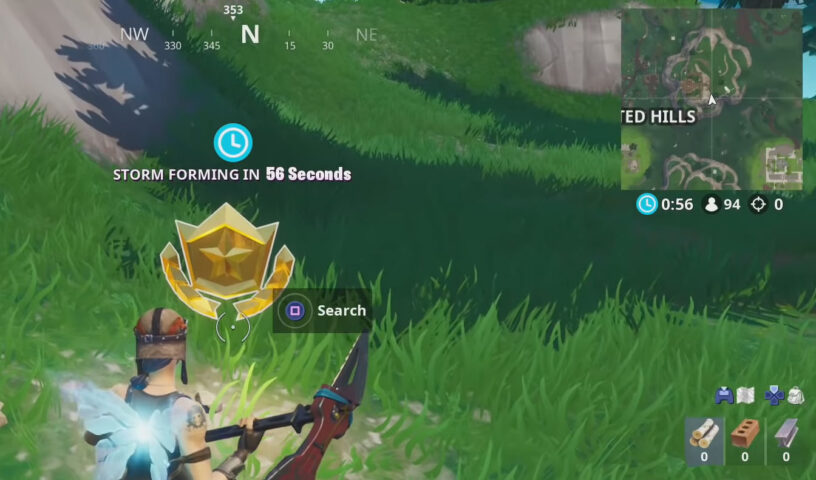 You'll find the clue in the description of the Loading Screen you earn by completing six weeks of challenges. Here it is: "Only the best snipers can take out a holo-clock tower lamp from the rooftops of Neo Tilted." You do NOT need to complete the challenges to obtain the Fortbyte.

Head on over to Neo Tilted and the Fortbyte will be located right at the big clock tower.

You don't need to do anything special, it will be just below the clock tower structure! 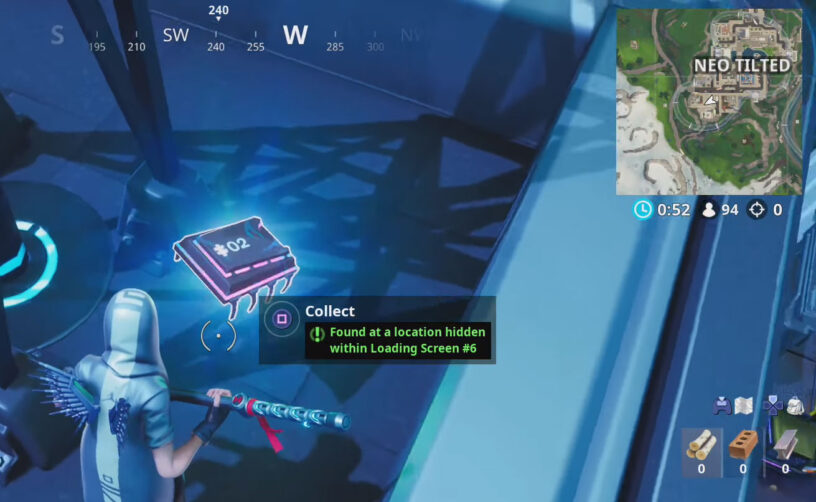 Week 7 brings us a hidden battle star, you'll have to complete at least seven weeks worth of challenges to unlock the loading screen and star. The loading screen is below, and shows off some of the leaked skins from the 9.30 patch. 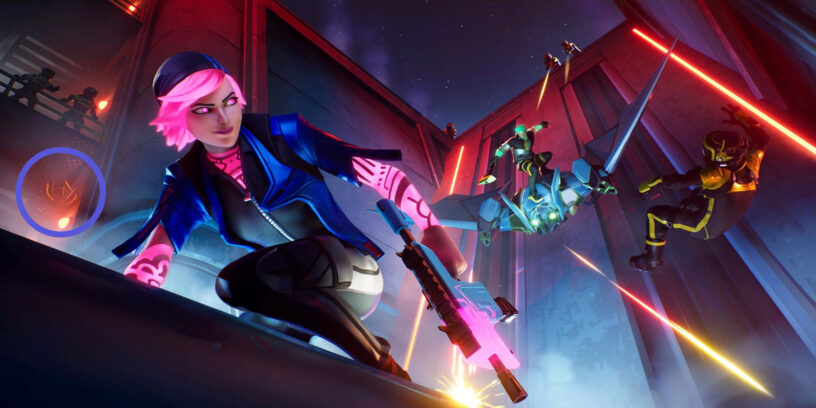 You can see the battle star on the left side of the loading screen. This spot is at the Pressure Plant, and towards the south portion where the dam is located. Head to the stair well on the west side, and you'll find the battle star!

Here's a look at the location in-game: 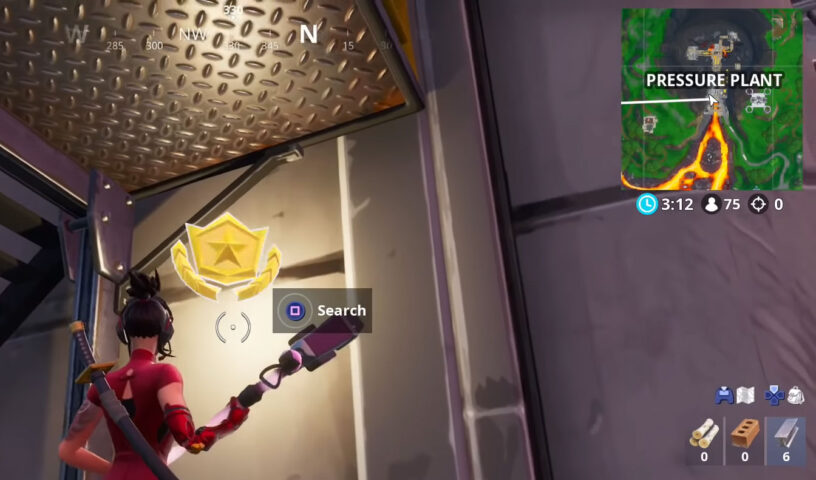 You'll find the clue in the description of the Loading Screen you earn by completing eight weeks of challenges. Here it is: "Peely and Jonesy first met at Bao Bros and instantly knew they would be friends forever." You do NOT need to complete the challenges to obtain the Fortbyte.

The Bao Brothers restaurant is over at Lucky Landing!

You don't need to do anything special, it's up on the second floor near the weight bench. 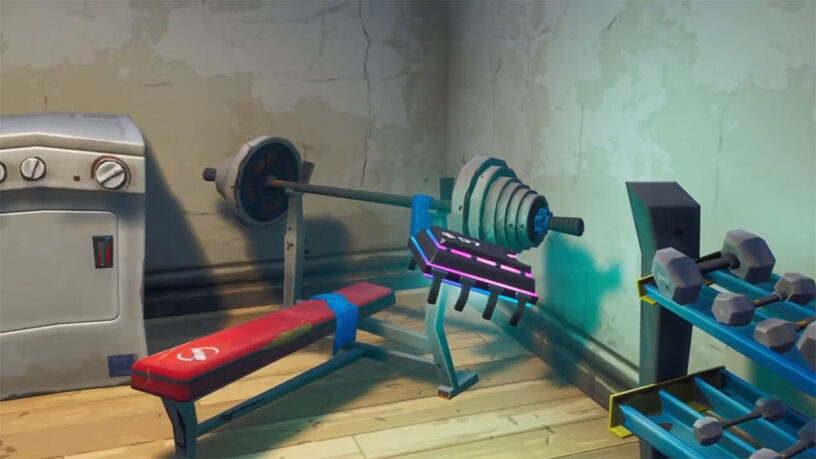 If you complete nine weeks worth of challenges in Season 9, you will unlock the following loading screen! You will also unlock the ability to collect a battle star that will give you 10 stars towards your Battle Pass. 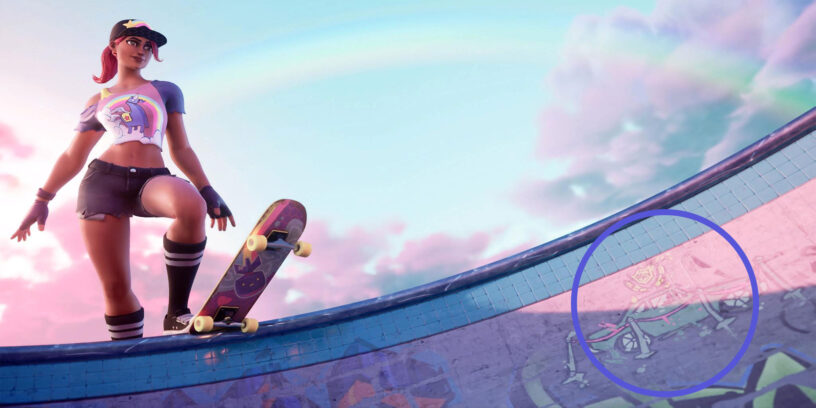 The battle star is over a car that is behind a velvet rope. You can find this location at Mega Mall!

It's on the first floor, and right through the front entrance to the mall area. 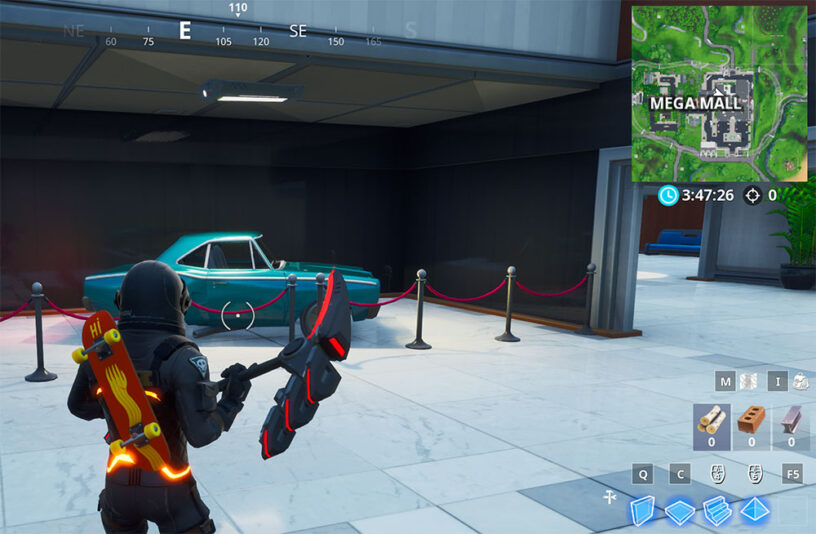 You'll find the clue in the description of the Loading Screen you earn by completing ten weeks of challenges. Here it is: "You're a long way from Lonely Lodge..." You do NOT need to complete the challenges to obtain the Fortbyte.

We're heading over to Lonely Lodge to locate this Fortbyte!

You'll find the Fortbyte in the western most cabin that is across from the parking lot. 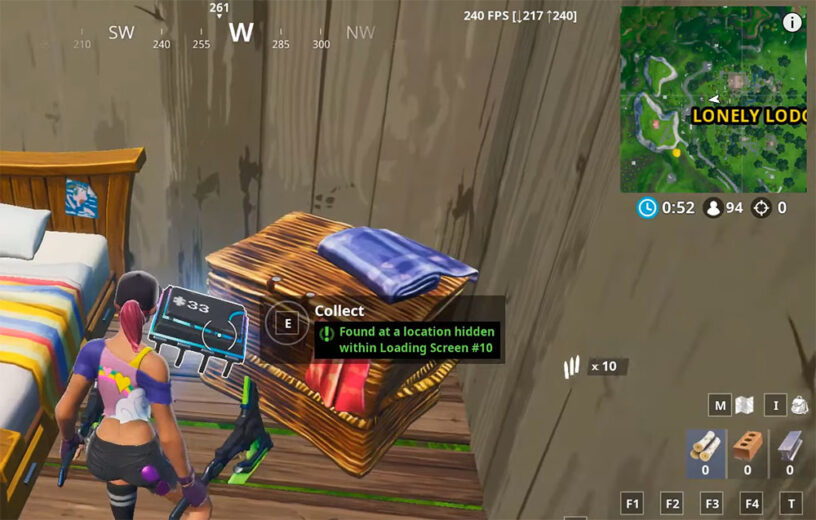 How to hide in tall grass for 10 seconds in Fortnite