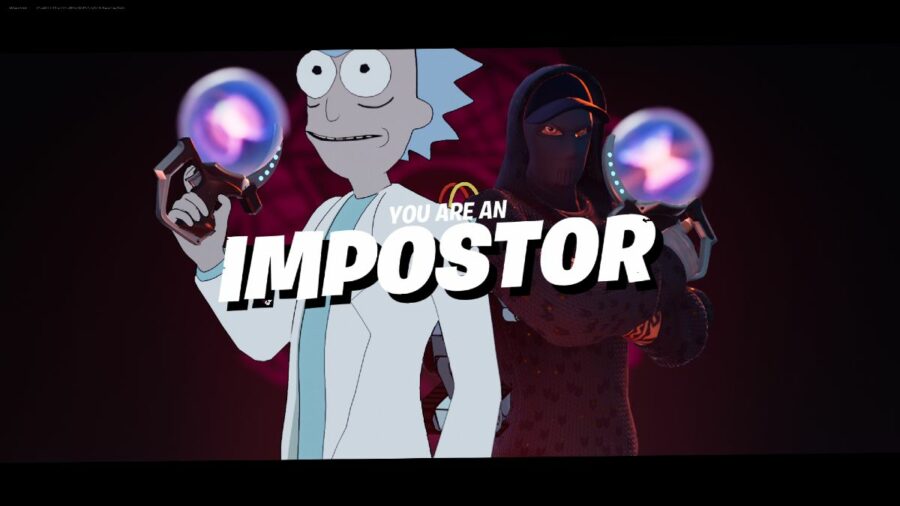 With the 17.40 patch for Fortnite in August 2021, we were introduced to a new game mode on the selection screen called Impostors. Upon playing it, many players will instantly recognize this game as a different version of Among Us, a well-known game in which players must complete tasks and avoid being hunted down by the Imposter in a match.

If you're an Imposter, you have two goals if you want to win: Eliminate other players and hide your identity.

This rather simple. It can be done by approaching the Agents as hitting them with the primary fire button when you're within range. It's best to do this as discretely as possible when no other players are within view and when the Agent is least expecting it. A common (and effective) technique is to hide around the corner from a task site and pop out right when the player works on the task. When you eliminate an agent, it's smart to run away from the scene of the crime so other players don't suspect you.

There are multiple ways to hide your identity during the match. The most effective means of doing this is to remain discrete when you work as an Imposter. Make sure you aren't in sight of any other players when you eliminate someone unless it's a fellow Imposter.

If discretion is difficult to come by, Imposters also have special abilities that they can use. These can be accessed by holding down the secondary fire button, placing your targeting reticle on the ability you'd like to use, then pressing the primary fire button.

A Peely Party is one of the most effective methods of disguise. It makes everyone turn into Peely and makes it impossible to distinguish between players. When Agents are in proximity to each other, this is the best tool to use to eliminate them in plain view. Just be sure to run away before the Peely Party ends!

Teleporting Players is a good way to cover your tracks after an elimination and a good way to frustrate Agents that were on their way to or working on tasks. When Agents team up and stick together to confirm each other's identities, this is a good way to separate them.

Disabling assignments works as interference. If you're struggling to find Agents to eliminate (which usually happens when their numbers dwindle), you can use this special ability to stop them from working on tasks. When you use it, they have to go to several specific spots to re-enable them, which provides you with a good opening to find and eliminate them.

Like Impostors, Agents also have two primary goals to secure a victory: complete tasks and eliminate Impostors during votes. You can't complete tasks or vote if the Impostor eliminates you, so be sure to keep an eye out when you're walking around!

You start off with two tasks assigned, both of which are marked on your map. You are assigned a new task every time you complete one of them. If you finish enough tasks before the Impostors eliminate you, you win the match. However, each task can be time consuming and it's hard to pay attention to what is going on around you. The list below outlines the tasks you might be assigned.

There is no way to distinguish between Agent and Impostor unless you see an Impostor eliminate an Agent. It is up to you to deduce who is an Impostor by observing other players' actions for suspicious personalities or behavior. When players are in the discussion room, you must keep an eye open for overly hostile or defensive behavior. Since players do not talk in the game, this can be difficult to do.

Ultimately, your goal is to vote out Impostors and avoid voting out Agents. To cast a vote on whoever you'd like to eliminate, focus your reticle on them and press the primary interact button to vote for them. There is no taking back a vote, so be careful!

The guide below provides an outline of some of the more basic game functions, like queueing and communication.

Queuing a game can frustrate new players because it defaults to a Private match. Private matches are for players who plan to play a game of Impostors with their party. If you don't have a party and instead want to play with anyone, you must set the queue to Public.

Communicating in Impostors is limited. There is no voice chat during the game, so players are instead required to communicate via the in-game chat commands and with emotes that represent the message they're trying to convey. When you're in discussion mode, you can press the communication button to open the conversation radial.

From there, you select between Accusation, Defense, Facts, or Questions.

Communication outside of the Discussion Room is limited to pre-selected Emotes for your character. They don't offer a lot of information. You can only do simple emotes like nodding your head, shaking your head, pointing a finger, crying, etc.

That about sums up the basic facts you need to know about this fun new style of play! Since it's no longer a featured LTM, it looks like it will be a permanent game mode!