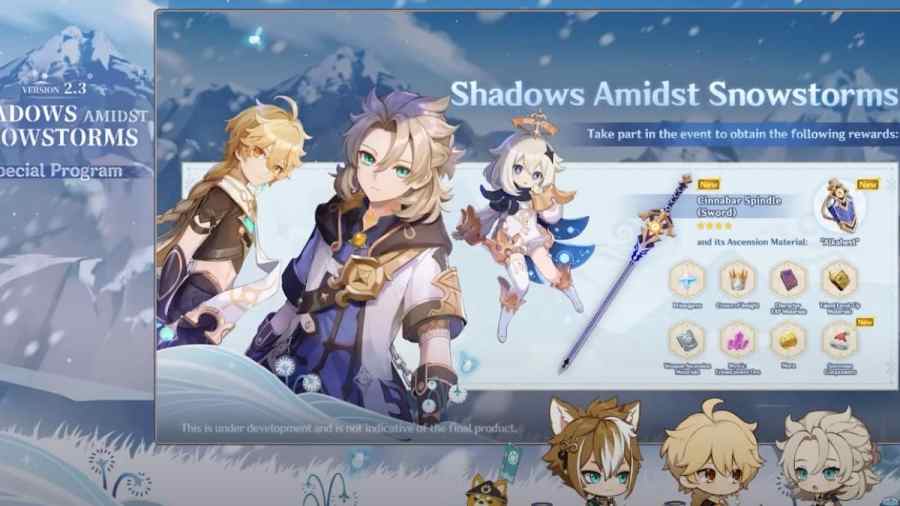 The Cinnabar Spindle is a four-star sword that features a unique Defense substat and Elemental Skill Damage-enhancing passive. Take advantage of these stats by giving the sword to Defense-scaling characters, such as Albedo.

Players can obtain this limited weapon from the event, Shadows Amidst Snowstorms, which will run from Nov. 25, 2021 to Dec. 13, 2021, and will jump off the existing Dragonspine storyline. You can obtain the Cinnabar Spindle by building snowmen using components obtained from various Trials and exchanging with friends.

Meanwhile, the sword can be Refined using Alkahest, which is a Refinement material that can be purchased from the event store using event currency during its runtime.

Passive: Spotless Heart—Elemental Skill Damage is increased by 40/50/60/70/80 percent of Defense. The effect will be triggered no more than once every 1.5 seconds and will be cleared 0.1 seconds after the Elemental Skill deals Damage.

Who Can Use Cinnabar Spindle

The Cinnabar Spindle is a niche sword due to its unique Defense substat and passive that scales off of the character's Defense. Most characters scale off Attack by default, which means that they aren't going to have enough Defense to make the sword's stats viable compared to existing options.

Check out our guide on Genshin Impact: Albedo Skills, Talents, and Ascension for more tips on how to build Teyvat's prodigal Geo alchemist.

Cinnabar Spindle: How to get, Ascension, stats, and who can use it in Genshin Impact