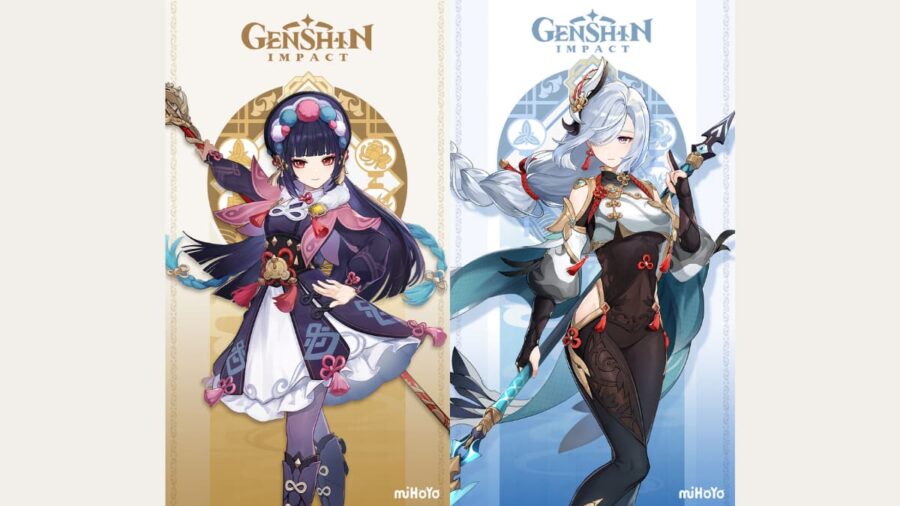 Another update is incoming! Genshin Impact's development team continues to expand Teyvat with new areas, characters, and exciting events and stories, one update at a time.

Check out this compilation of leaked content that's expected to drop in the game's Version 2.4. But remember: take leaks with a grain of salt and know that changes between the beta server and actual release aren't uncommon.

A huge thank you to UBatcha, Genshin_Intel, WFP, Honey Impact, and the Genshin Impact community.

Genshin Impact's Version 2.4 update is scheduled for Jan. 5, 2022. This is subject to change but falls in line with the game's attempt to roll out a consistent six-week update period.

This is our tentative road map of when the updates should be released. Anything after update 2.4 is purely guesswork based on the game's six-week update schedule so far, as miHoYo has not released another roadmap.

Genshin Impact has confirmed through its official channels that two new characters will appear in Version 2.4.

One has traversed many realms and taken a great many pupils. Among them, Shenhe bears the closest resemblance to oneself.

For all character information, such as Shenhe Skills, Constellations, and Ascension Materials, we've got you covered.

One performance by Yun Jin at our tea house rakes in enough Mora that we won't have to open for a whole month!

For all character information, such as Yun Jin Skills, Constellations, and Ascension Materials, we've got you covered.

These two new additions have been hinted to drop on the first banner of Version 2.4, but it's currently unclear who will be occupying the second banner run. However, there are also rumors circling around about the other characters that may make a comeback through reruns—namely Xiao, Ganyu, and Zhongli—but miHoYo has yet to make an official confirmation.

Related: Who is Yun Jin in Genshin Impact?

A new five-star polearm called the Calamity Queller has been leaked to appear in Version 2.4. Visually, its color palette matches that of Shenhe's.

The information concerning this weapon is particularly sparse, so don't be surprised if there are major changes in the actual release.

Apart from the above reruns, there's also an interesting character that could possibly be in the works. A rumored character called Yelan, who may be Madame Ping in her youth, was supposedly the mysterious, blue-haired character who appeared in the final cutscene from the Stove God event. Her weapon has been leaked to possibly be a crossbow, a new weapon type that could come to Teyvat in the near future.

Moreover, leakers have hinted at the possibility of other weapons to come in Version 2.4 or later, including a weapon that could be used in both near and far-ranged situations.

Enkanomiya is a location that was heavily teased in the Moon-Bathed Deep World Quest—a land hidden beneath Watatsumi Island. There's a possibility for this area to come out in Version 2.4, along with new environment mechanics specific to Enkanomiya.

Due to its relevance to the World Quest, some have hinted at The Moon-Bathed Deep being a possible prerequisite to unlocking Enkanomiya. In addition, the area option in the World Map could possibly shift to show each nation plus Enkanomiya separately instead of being labeled under the same umbrella (they're currently labeled under Teyvat).

There are a lot of new enemies that have been leaked to come in Version 2.4, so get your teams ready for some action! Again, take all the information with a grain of salt, as enemy mechanics almost always go through changes between the beta and actual launch.

A new World Boss based in Enkonomiya has been hinted to come in Version 2.4, but it's currently unclear what it will be. Some leakers have dug up its Character Ascension material drop: the Dragonheir's False Fin, which could be used for Ascending Shenhe. The World Boss could be the Cryo and Electro Vishaps combined in connection with a leaked event, but nothing has been confirmed.

Related: Who is Shenhe in Genshin Impact?

Get a headstart on prepping for the Abyss with these leaked floor enemy information.

New fishes could possibly come in Version 2.4. Teyvat's resident anglers may be able to enjoy catching the Divda Ray and Formalo Ray, which are yellow and purple, stingray-inspired fish. Based on how they have been described, these fishes may appear in Enkanomiya.

Some new dishes could possibly make their way to Teyvat—and Paimon's tummy! Check out what we've been able to scrounge so far:

Name Card collectors will be excited to hear that, per leaks, there should be at least four new Name Cards coming in the update.

Some Liyue-inspired Furnishings have been leaked to arrive in Version 2.4. The exterior Furnishings visually look like Lantern Rite stalls, while the interior options include a vase and two screens. It's currently unclear how these pieces can be obtained.

There have been rumors about the possibility of new skins coming in the next update, specifically for the Liyue Qixing: Keqing and Ningguang. Based on the previous skin rollout, the five-star skin could possibly cost Crystals, while the four-star skin may be distributed for free. But of course, there's no saying how this mechanic could change in Version 2.4.

Leakers revealed findings of Hangout Events for Yun Jin and Ningguang, which players might be able to play as soon as Version 2.4 drops.

There are a lot of exciting events that leaks have hinted to come to Version 2.4. But don't get too excited—with weeks to go, there's no telling what changes could come between the beta and launch.

Along with the new area, there's a chance for a corresponding event to roll out to help players navigate the depths of Watatsumi Island.

The Lantern Rite has a good chance of coming back in time for the Lunar New Year—but it's been tweaked to offer a new experience that introduces new characters and stories. Based on last year's event, the Lantern Rite could be the star of Version 2.4, with three event currencies that could roll out in phases.

With Sleet and Storm

With new Bosses come corresponding events. With Sleet and Storm has been leaked to introduce players to the Rimebiter Bathysmal Vishap and the Bolteater Bathysmal Vishap in Enkanomiya. It's unclear whether there are actual event challenges with independent rewards, or if the event will simply advertise the new Bosses.

Over Mountains and Seas

The leakers hinted at a bake-tanuki-related event, which stars Kichjiboushi, who will accompany you to see the world beyond Chinju Forest.

A Study in Potions

Earlier leaks introduced the possibility of an Alchemy event in Version 2.4, and some believe that it may be called A Study in Potions. It starts at Monstadt, where Timaeus needs your help in creating a legendary medicine.

The event has been hinted to be structured like previous Trials-with-buffs events, like the recent Labyrinth Warriors. In that sense, players would enter a Trial carrying three Potions that provide certain buffs.

The Windtrace Event, which ran in an earlier Version of the game, has been leaked to make a comeback in 2.4 with similar mini-games but new Contested Locations. This time, Inazuma could possibly join in on the fun.

Stay tuned for more updates, leaks, and guides here on Pro Game Guides. While riding the Version 2.4 hype train, don't forget to clear through all the fun things already released in Version 2.3. Check out our Genshin Impact Shadows Amidst Snowstorms Event Guide to help you out!

How to complete Fishing Jiangxue in Genshin Impact