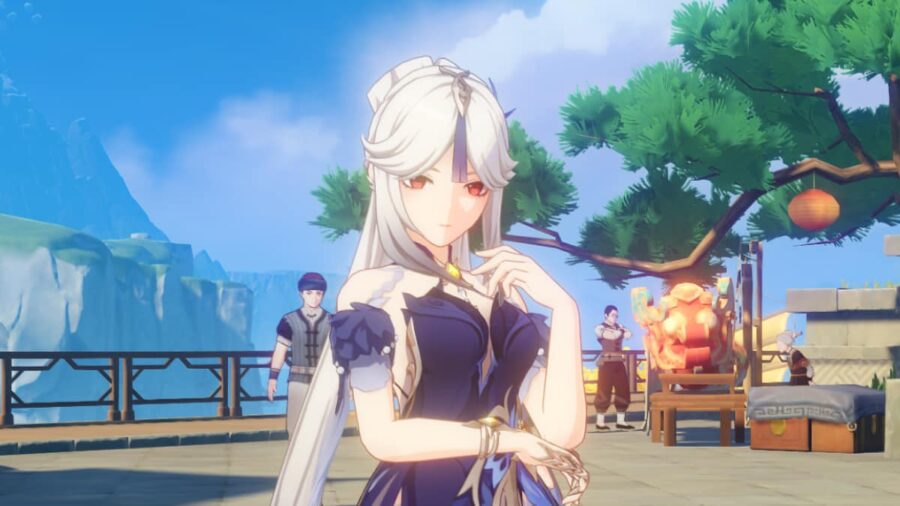 Ningguang, the Tianquan of the Liyue Qixing, is one of the most powerful mortals in Liyue. With the Jade Chamber enveloping the skies once again, spend time with Ningguang and learn a thing or two about her past.

Players who have completed The Crane Returns on the Wind, the Interlude to the Archon Quest, can unlock this Hangout Event from the Quest menu in exchange for two Story Keys.

Ending 1: While the View Remains Good

Ningguang's Hangout Event starts in the Jade Chamber, where you replace Baishi as the scheduling secretary for the day, as she's preoccupied with a major auction. It doesn't matter what you choose for the first few dialogues, as all roads lead to the same outcome: you'll be accompanying Ningguang for the day.

When Baishi asks you to create a schedule for Ningguang, choose to reply with (Alright. Time to make a serious effort.) Much later, after your lunch with the businesswoman, Ningguang will ask you about whether or not you should heck in on the secretary trio. Respond with Don't worry about them. They're very capable. You can answer however else you'd like for the rest of the Hangout to unlock this ending.

Ending 2: The Weight of a Collection

To get this ending, start at the dialogue route The Grand Banquet—you don't have to redo everything from the start. But after your lunch with the businesswoman at Liuli Pavillion, select the option Well, we have time to go and check up on them if you want. This will prompt you to head to the auction with Ningguang, which she will be hosting herself. You can choose to answer the rest of the conversations however you want.

Start at the dialogue route Scheduling the Day. This time, choose the option (Alright. Time to avoid anything too complicated.) The next day, you show Ningguang a blank schedule to give her time off. Choose the option Let's do something you never normally have time for.

She'll take you around Liyue to create chess pieces of the Traveler for the newest edition of Liyue Millennial—an uncharacteristically nonprofit game of chess to commemorate the nation's victory against Osial.

Related: Where to find Starsplinter Iron and Subrosium in Genshin Impact: The Crane Returns on the Wind Archon Quest

Start at the dialogue route Time Off! and choose the option Let's do something you never normally have time the opportunity to do. Then subsequently select Let's start at the bottom of the ladder.

You and Ningguang will go around Liyue Harbor trying to make a profit from zero capital. When it doesn't work out, you both head to Guili Plains to do some adventuring. There are two small battles and a Weasel Thief chase involved in this Hangout Event.

Ningguang's fifth and last Hangout ending starts at the dialogue route Time Off! Choose the option Let's do something you never normally have time the opportunity to do. But this time, follow-up with Let's go and find some work at Northland Bank.

You both head to the Northland Bank and are greeted coldly by Ekaterina. Upon leaving, you realize that you're being trailed, so you search for the culprit with Ningguang. Choose the Suspicious Person with blonde hair. Completing this ending will unlock the Memories of the Heart Achievement called Overprotectiveness.

Completing all of Ningguang's Hangouts will also merit you the Memories of the Heart Achievement called Megrez's Companion Star.

Check out our guide on How to clear the Sea Gazer’s Abode Domain in The Crane Returns on the Wind Archon Quest Genshin Impact if you're having trouble completing it to unlock this Hangout.