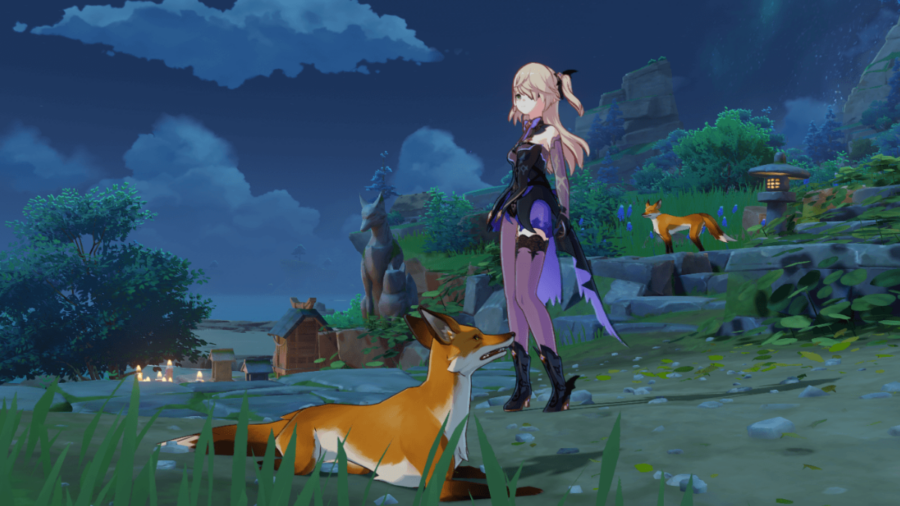 After cutting a deal with the Village Chief in Genshin Impact, you'll gain access to the well behind his house, which is filled with treasures—and an electrifying puzzle. Here's how to solve the well puzzle and break the barrier.

Starting from the Pray point directly in front of the Electro symbol (labeled 1 in the above picture), move counter-clockwise and set each point to the next corresponding number. 2 is already set; move to 3 and interact with it so that it now has three "tails."

As you move counter-clockwise around the room, ignore the shrine that's partially obscured by the branch. Go straight to the next shrine that's out in the open and set it to 4. Then return to the last shrine and mark it as 5.

Return to starter 1 and prepare yourself for combat. When you Pray again after correcting the puzzle sequence, a battle will immediately start with phantom warrior Ochimusha.

After defeating Ochimusha, Kazari, the masked shrine maiden from before, will appear and speak to you of a new quest (because there's never a moment's rest for heroes!). Before you leave the well, don't forget to take a good look around—this space has hidden ledges you can climb, and you won't want to miss out on any potential rewards.

A Flower Blooms in a Prison Genshin Impact Guide

Where to find Otogi Wood in Genshin Impact