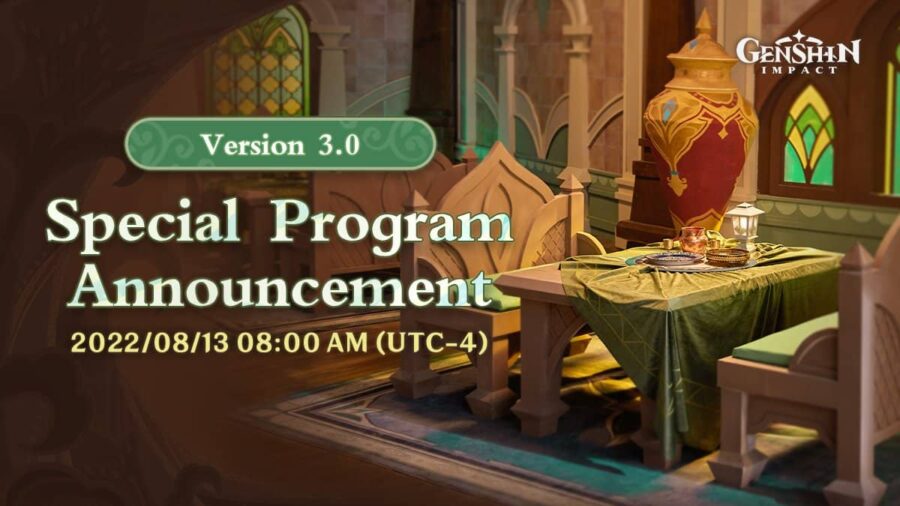 Genshin Impact's Livestream Special Program is an exciting event that the community can tune in to as HoYoverse announces what's in store for the game's next big update. You can preview new areas, characters, banners, events, Story Quests, and other announcements detailed by Genshin's cast of characters, as they introduce the long-awaited Sumeru update. Most importantly, HoYoverse sends out around three Genshin Impact codes in every Livestream that you can claim for Primogems and other rewards. Here's everything you need to know about how to tune into the Livestream Special Program for Version 3.0.

Here's the Genshin Impact Version 2.8 Livestream schedule across various timezones. If you can't find your timezone, use a timezone converter and match your city against one of the provided locales below to find your local schedule.

How to watch the Genshin Impact Version 3.0 Livestream

The Version 3.0 Livestream will simultaneously be streamed by Genshin Impact on their official Twitch and YouTube channels. If the stream doesn't start at the promised time, simply refresh the page, as the huge volume of watchers can sometimes cause your screen to be stuck in the waiting room.

If you miss out on the Livestream, don't worry, as Genshin Impact will post it on their official YouTube channel a few hours after the program ends.

Make sure to bookmark our compilation of Genshin Impact Codes to claim Livestream Primogems as soon as they're released.