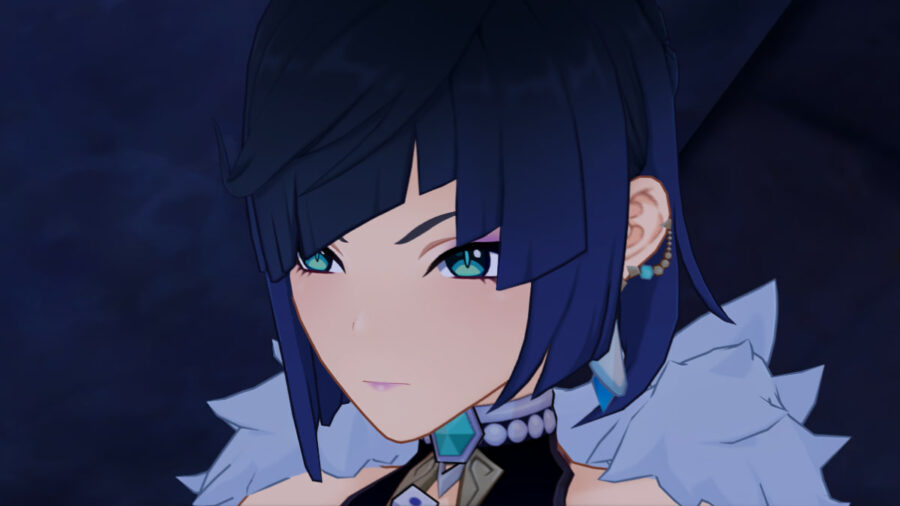 The Umbrabilis Orchis Chapter: Act I - Calculated Gambit is Yelan's Story Quest, which covers the candidate selection process for the next Tianshu of the Liyue Qixing. The Story Quest is divided into three parts, the third of which is called Foregone Conclusion. In this segment, you need to enter the Qingxu Pool Underground Ruins—Yelan's Story Quest Domain. Read on to find out how to solve all the puzzles inside the Domain.

Upon entering the Domain, you need to defeat the group of Hilichurls to access the main puzzle room. The gate leading to the next room is locked, so head to the left of the waterfall, where you'll find a stone elevator. Step on the stone and wait for it to lift you up.

Once lifted up, glide toward the platform, where you'll find a small fireball and a lamp. Approach the fireball until it circles around you, then approach the lamp to transfer the fireball into it. At the opposite side of the waterfall, you'll find another lamp and a locked gate, but with no fireball nearby.

Defeat the Geovishap Hatchlings guarding the gate to unlock it. Enter the gate to find an Exquisite Chest and a fireball. Like before, approach the fireball, then approach the empty lamp outside to light it up.

Once that segment is done, a cut-scene will play. The water below will drain, revealing a hidden entrance. Glide downward and enter the crack in the wall to find another stone elevator. Likewise, step on the stone and wait for it to lift you up. Upstairs, you'll find another lamp puzzle, but you need to solve another puzzle to find the fireballs to activate them.

Defeat the Hilichurls on the opposite side of the platform and enter the opening behind them. Inside, you'll find a large wall with a symbol. Interact with the wall to move it aside, revealing an entrance that leads deeper within.

Upon entering the room, you'll find the first fireball and a few moving doors. Approach the fireball to pick it up. It won't disappear, so you can continue the puzzle and take it to a lamp later on. Then, move the door on the left to head deeper into the ruin.

Inside this room, you'll find the second fireball in front of a torch. Approach the fireball to claim it, then head further inside the claim the Exquisite Chest. Once that's done, exit the cave until you're back to the clearing with the two lamps. You will need to move a few doors to make it out, but simply follow the quest navigator to help you find your way. Approach the two lamps to light them up, completing this segment.

Related: How to solve the Geogranum Lamp puzzle beside the Domain of the Wayward Path in Genshin Impact

Jump down to the first floor of the ruin, where you'll find the final puzzle, which involves moving statues. Your goal is to move the yellow statue to the area marked by a yellow glow. The puzzle consists of three yellow glows, which means that you need to guide three statues to the right positions.

First, we'll solve the rightmost segment. The statues are labeled by number in the image above to make it easier to follow the steps. Assuming that the yellow glow is north, follow the exact steps below to solve this part:

Next, we'll solve the leftmost and middle segments together. The statues are labeled by number in the image above to make it easier to follow the steps. Assuming that the two remaining yellow glows are north, follow the exact steps below to solve this part:

If you followed the steps above, all three yellow statues will be positioned in a horizontal line, and the door behind them will open. This marks the end of the puzzle, but the Domain is far from complete. The game will guide you through the rest of the battles and dialogue as you discover the secrets behind Zhiyi's personality.

If you haven't completed the previous part of Yelan's Story Quest, check out our guide on How to Continue looking for clues at the wharf in Yelan’s Story Quest – Genshin Impact Calculated Gambit.