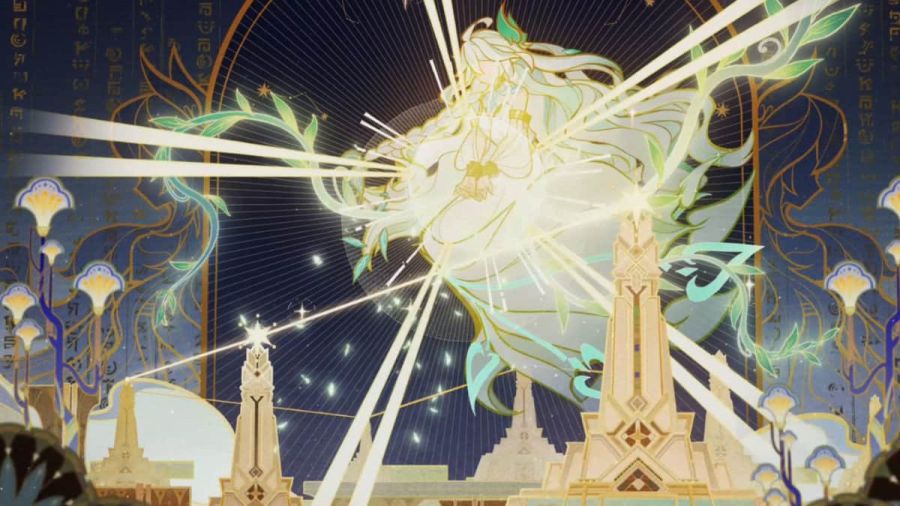 In the last segment of the Sumeru Archon Quest Chapter III: Act IV - King Deshret and the Three Magi called Secret of The Scorching Desert, you must enter a Mysterious Ruins Domain hidden deep within the desert. There are a lot of confusing puzzles inside, so follow this walkthrough to help you complete it and claim all the Chest rewards.

Follow the steps below to complete the Domain. If you make a mistake, you can try as many times as you like. However, we highly recommend looting all the Chests as soon as you see them, as you can't return to the Domain after completing it.

Upon entering the Domain, turn left to find three pillars. You need to rotate each of them in any order until they show the illustration in the reference image above. The pillars will also glow blue to indicate that they're rotated correctly. Once you're done, an elevator will appear in the center of the room. Step onto the elevator and interact with it, activating it and bringing you to a lower floor.

Next, go down the stairs to find a locked Exquisite Chest surrounded by fungi. Defeat the enemies to unlock the Chest and loot rewards. Afterward, head further down and follow the quest marker toward the next room. The next part is a bit confusing, so follow the steps carefully.

Defeat all the fungi in the blue room to unlock the elevator. Step onto the elevator and interact with it, activating it and bringing you to a higher floor. Once the elevator stops, enter the room and defeat the fungi to unlock an Exquisite Chest.

Turn back to the entrance, where you'll find a button that you can interact with to control the elevator. Interacting with it will make the elevator go up and down. Your goal is to hop onto the elevator while it's going up so it can take you to an even higher floor.

Once you're on the upper floor, defeat all the fungi to unlock two switches on the ground. The logic behind the puzzle is simple:

Your goal is to find a way to make all three pillars show the same illustration. First, focus on the left switch.

You need to follow the same logic for the other side. Now focus on the right switch.

Once that's done, step onto the elevator and interact with it, activating it and bringing you deeper into the Domain. The rest of the Domain can be completed by following the quest marker and enjoying the dialogues and cutscenes.