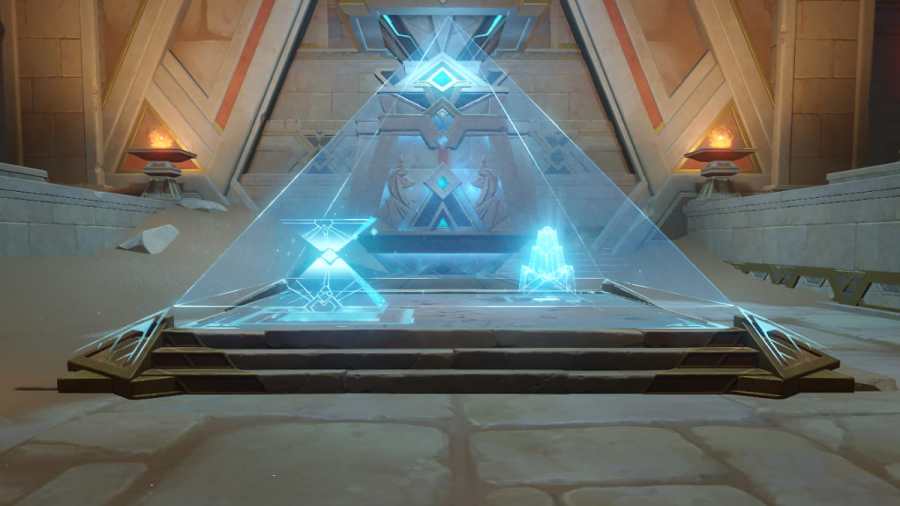 The Secret of Al-Ahmar is the third part of the Golden Slumber World Questline, detailing the Traveler, Tirzad, and the mercenaries' adventure within The Mausoleum of King Deshret.

To unlock this World Quest, you must first venture into the Sumeru desert and visit Aaru Village, where you can accept the Golden Slumber questline. You must complete the following quests:

Once you're done with both, you'll automatically unlock The Secret of Al-Ahmar.

Upon starting this World Quest, the game will prompt you to ride the elevator, which you can do so by following the quest marker. However, if you teleport outside of the Temple, here's how to return to the secret passage behind the mural.

From the Teleport Waypoint in Khemenu Temple, enter the pyramid-shaped tunnel until you reach a large room. Then climb toward the elevator and activate it to reach the floor with the mural you previously unlocked.

Related: How to get Glabrous Beans in Genshin Impact

Enter the mural to find an elevator—interact with it to reach your destination. After the small cutscene, continue forward to enter The Mausoleum of King Deshret. Enter the pyramid to find two Primal Constructs that you need to defeat. Once that's done, proceed forward to enter a room filled with gold coins.

Try to open the coffin

In this segment, you need to search for four Primal Embers scattered across the two rooms beside the giant guard statues, and follow them back into their posts in the main room. Refer to our guide on How to Try to open the coffin for a full walkthrough of this part.

Find a way to the upper floor

Climb the tomb to find an elevator, and interact with it to head to the upper floor.

Go to the highest floor of King Deshret's Mausoleum

Once the elevator takes you up, you'll be prompted to go to the top floor. Turn right to find a room. Enter it and keep following the stairway until you see the glowing spot, which you need to approach to continue the quest. After the dialogue with the team, you'll unlock Clearance for your Scarlet Sand Slate. You'll also unlock the Wonders of the World Achievement called Create, Swap, Store, and Use.

Find the members of the archaeology team

After speaking with Paimon, interact with the Control Unit to open the gate leading toward the depths of the Mausoleum. You'll immediately spot the archaeology team fending off the Fatui—lend them a hand and defeat all of the enemies.

Benben remains missing, so follow the quest marker toward checkpoints (glowing spots) until you eventually regroup with the team. This is quite a long trek, so don't be alarmed by the distance. You don't have to defeat enemies or solve puzzles along the way, but nothing's stopping you!

Go to the Fatui camp to search for clues

After the dialogue with the archaeological team, make sure to activate the hidden Teleport Waypoint beside you to make it easier to travel later on. Then glide down the cliff to approach the Fatui. You'll need to engage in battle against Samail and Fatui members.

Proceed deeper within the ruins

In this segment, you need to search for two Primal Embers and lead them back to Opet Hall. Refer to our guide on How to proceed deeper within the ruins for a full walkthrough of this part.

Investigate the room located deep within

After leading both Primal Embers into Opet Hall, the gate will automatically open. Enter it to investigate the room within the depths of the Mausoleum, prompting a dialogue with the archaeological team and completing the World Quest. You'll unlock the Wonders of the World Achievement called The Amazing Pyramid and the next part of the Golden Slumber questline called Dreams Beneath the Searing Sand.

Check out our guide on How to unlock the Garden of Endless Pillars Domain in Sumeru in Genshin Impact to explore more of the massive desert.