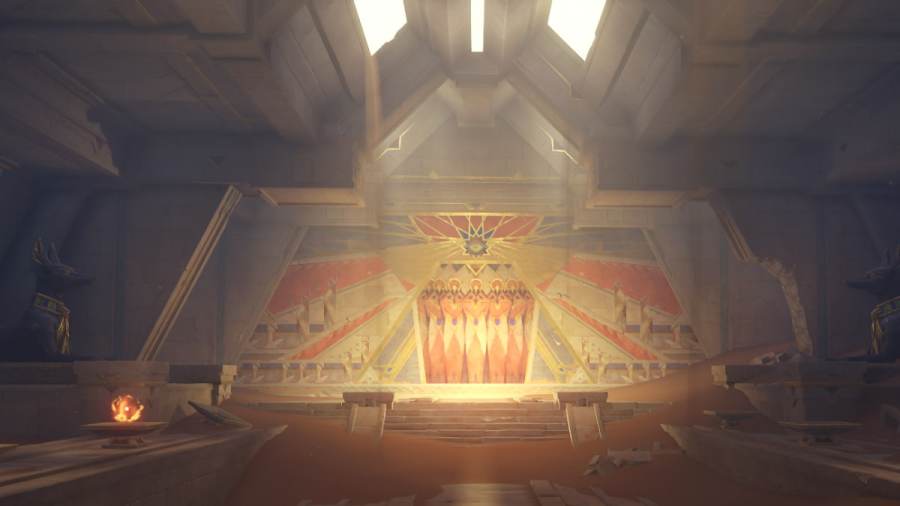 An Introduction to Indoor Archaeology is a Genshin Impact World Quest and the second part of the Golden Slumber World Questline. It follows the journey of the Vahumana researcher named Tirzad, who's journeying across the desert to explore the ruins left by King Deshret's rule with two Eremite mercenaries.

To unlock this World Quest, you must first venture into the Sumeru desert and visit Aaru Village, where you can accept the first part of the Golden Slumber questline: Lost in the Sands. Complete it to automatically unlock An Introduction to Indoor Archaeology.

Head to the Sobek Oasis to set up camp with your travel group. Once that's done, you need to search for Jebrael. He's standing on a cliff that's difficult to climb, so head to the area pictured above to find a sand current, which works just like a wind current—use it to propel you upward and speak with Jebrael. Once that's done, return to camp where you'll spend the night. The next day, follow the quest marker toward Khemenu Temple, located to the right of The Mausoleum of King Deshret.

Go straight ahead to find Jeht. There are two puzzles you need to complete—one through the door on the left and the other through the right. You can solve them in any order.

Related: 9 easy achievements you may have missed in Genshin Impact

Puzzle on the right room

Head right and interact with the Control Unit to open the door. Follow the path to find a clearing with a Replicator Keystone puzzle. Start by picking up the Forged Primal Light (blue prism) by approaching it.

With the prism floating around you, step onto the Replicator Keystone (platform) to summon a device. Interact with it to Release a floating blue ball. It behaves similarly to a Seelie—keep following it and releasing it until it reaches its post.

Once you get to the top of the stairs, the blue ball will attach to another device. Release it again until it lights up a giant torch in the main room, where Jeht and Benben are waiting.

Puzzle on the left room

This puzzle is very similar to the previous one. Head to Jeht's left to find a Control Unit, then interact with it to open the door. Follow the path until you see a room with a Primal Construct. You need to defeat it to unlock the device behind it. Interact with the device to release a floating blue ball. Follow the blue ball until it attaches itself to another device, then release it again and follow it until it reaches its post in the main room.

Enter the new door and follow the path until you find a hidden Teleport Waypoint. Activate it to make it easier to return to the area at any time. Once that's done, keep moving forward until you find a glowing spot, which will prompt dialogue with the exploration team.

Related: All new Sumeru Desert Creatures you can catch in Genshin Impact

Return to the previous room and look for clues

You need to turn back and return to the room with the Teleport Waypoint, where Jeht and Benben are waiting. There are two entrances with two puzzles that can be done in any order.

Puzzle on the right room

Assuming the Teleport Waypoint is in front of you, turn right, enter the door, and follow the path until you see Jebrael in front of another room. Upon entering the room, you'll find a giant boat on top of a monument. Use the Four-Leaf Sigil to propel yourself upward, where you'll find a Forged Prism Light (blue prism). After obtaining it, go to the small opening under the boat.

You'll find a Replicator Keystone (platform). Place the prism there to summon a device. Interact with the device to release a floating blue ball, which you need to follow all the way to another room. Before that, the blue ball will go through the floor underground.

The floor contains a platform called an Illusory Keystone, which will disappear once you step on it, allowing you to head to a lower floor. Be careful about fall damage! Once you're on the lower floor, keep following the blue ball until it attaches itself onto another device.

You'll find a new mechanic called Large Fan Blades, which blow out a strong gust of wind like an electric fan. Wait until the Large Fan Blade is not releasing any wind, then release the blue ball from the device. When it stops in front of a door, release it again until the ball reaches its post to light up a giant torch.

Puzzle on the left room

Assuming the Teleport Waypoint is in front of you, turn left, enter the door, and follow the path forward. Ignore the platform and turn left instead. You'll eventually find yourself in a room with a Primal Construct—defeat it to get it out of the way.

Climb the structure at the center of the room to find a giant hourglass. Interact with it to begin a Primal Sandglass Challenge. This is an optional Challenge—you don't actually need to complete it. However, starting it will summon Four-Leaf Sigils, which will allow you to reach the device at a high edge of the room. Interact with the device to summon a blue ball, which you need to follow.

Once the blue ball attaches to a device in front of a room, release it again to open the door and press on. Keep following the ball until it reaches its post and lights up a giant torch.

Once you complete the two puzzles above, a dialogue with the exploration team will prompt. Enter the room in front of you and interact with the floor to activate the elevator, which will take you to a floor below. Then head toward the monument in front of the room to prompt dialogue and complete the World Quest. You'll unlock the Wonders of the World Achievement called Thinking Like a Vahumana Scholar, as well as the next World Quest in the series called The Secret of Al-Ahmar.

Check out our guide on How to unlock the Garden of Endless Pillars Domain in Sumeru in Genshin Impact to explore more of the desert.