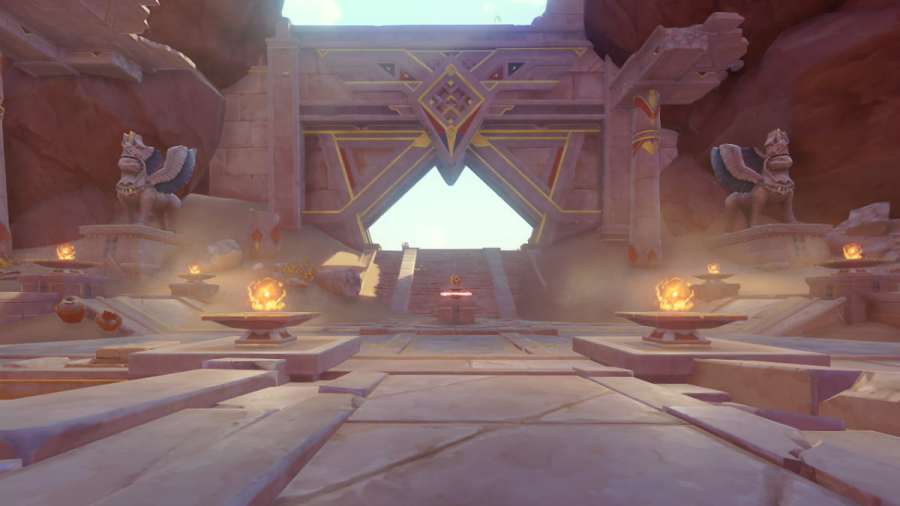 The Dreams Beneath the Searing Sand is the fourth part of the Golden Slumber World Questline, which follows the archaeological team's delve into the depths of Khaj-Nisut.

To unlock this World Quest, you must first venture into the Sumeru desert and visit Aaru Village, where you can accept the Golden Slumber questline. You must complete the following quests:

Once you're done with the above, you'll automatically unlock Dreams Beneath the Searing Sand.

The quest will prompt you to return to Sobek Oasis to regroup with the rest of the team, which you can do so via the Teleport Waypoint. Once you reach the camp, you must defeat the Eremites to continue. After the dialogue, you must head to the new camp near the Dune of Carouses.

After another round of conversations with the team under the starry sky, you must head to Khaj-Nisut, a giant ruin northeast of the desert. You need to go up the stairs toward the cliff behind the locked Control Unit (where the arrow is pointing above) to trigger the next part of the quest. Follow the quest marker to the nearby Eremite camp and defeat all enemies.

Related: Where to find Ajilenakh Nuts in Genshin Impact

Search for clues in the Eremites' camp

You must interact with the glowing Investigate spots in this segment to search for clues. They're located in the following places:

After interacting with all three glowing Investigate spots, speak with Jebrael to continue.

In this segment, you need to complete three trials north, west, and south of Khaj-Nisut. Enter the pyramid-shaped entrance in each area marked by the quest marker in the World Map to proceed. You can do them in any order—see below for walkthroughs of each puzzle:

Find the way to Khaj-Nisut

After passing the three trials, the Control Unit outside Khaj-Nisut will unlock. So head to the Teleport Waypoint and enter the nearby clearing to interact with the Control Unit. A small cutscene will play, dispersing the barrier surrounding the ruin in front of it. You'll unlock the Wonders of the World Achievement called Fata Morgana.

Next, use the Four-Leaf Sigils to propel yourself toward the entrance, where there's another Control Unit that you must interact with to open the door.

Once inside the final ruin, turn left to find an opening leading downward. Ignore the Large Fan Blades and use a Plunge Attack not to get caught up by the air. You must plunge downward twice to make it to the lower floor, where there's a giant mechanism at the center of the room.

Activate the Plinth(s) of the Secret Rites

As soon as you descend, you'll find a Control Unit in front of you. Simply interact with it to complete this segment, then walk forward a few steps to continue.

Activate the mechanism in the center of the hall

Next, you need to activate the giant mechanism by guiding the three Primal Embers in the area—the quest marker brands their locations in the World Map and mini-map. You can find the full walkthrough of completing this part by checking out our guide on activating the mechanism in the center of the hall.

Follow the direction of the quest marker to find a Large Fan Blade. Wait until it turns on, then use the air to propel yourself upward. You'll find yourself in a room filled with floating platforms.

Related: Is Cyno worth pulling for in Genshin Impact?

To solve this puzzle, you must interact with the Prism in this order:

If you make a mistake or forget, you can relog to restart the puzzle.

Once you solve the puzzle correctly, the game will divert your attention toward a switch on the wall. Use the Four-Leaf Sigil to propel yourself toward the switch, then interact with it to bring down an elevator. Step onto the elevator and interact with it to head to Khaj-Nisut's upper floor.

Turn back and jump down the hole to head to the lower floor, then keep moving forward and jumping down to pass through the barriers and get to the lowest floor. Once you're on the ground, follow the direction of the quest marker to find the exit. There's no time limit for this segment, so don't panic. If you fail, you can always try again. Once this part is over, you'll engage in dialogue with the team and eventually disband in Aaru Village, completing the World Quest. You'll unlock the Sumeru: The Gilded Desert - Series I Achievement called Slumber, the Brother Of...

Check out our guide on How to Look for the materials that Kayvan needs in Genshin Impact to complete a Sumeru Daily Commission.