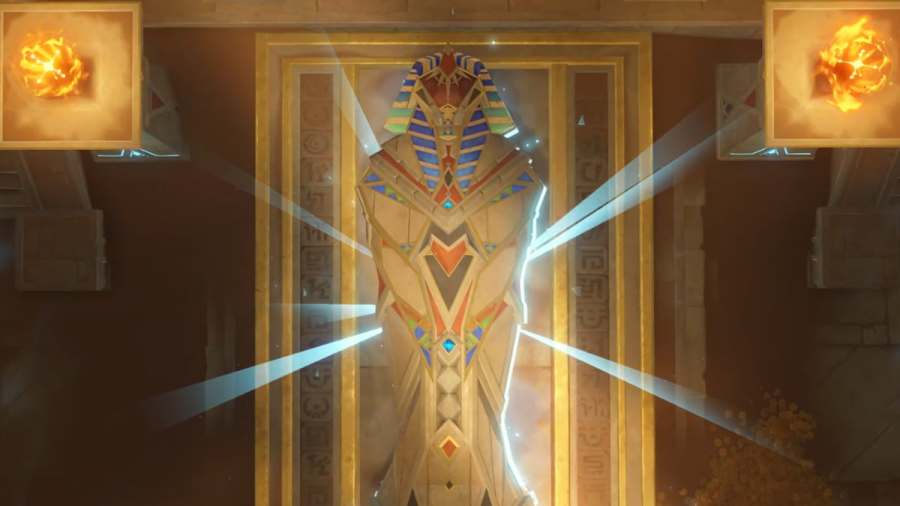 The Secret of Al-Ahmar is the third part of the Golden Slumber World Questline, where you, Tirzad, and the mercenaries explore The Mausoleum of King Deshret. You'll encounter plenty of puzzles in the dizzying, maze-like interior—the first of which involves finding a way to open King Deshret's coffin.

There are two rooms beside the giant statues of the guards on the left and right of the coffin. Your goal is to find devices that release Primal Embers (floating blue balls). There are four in total and they can be unlocked in any order.

Room on the right

From the main room with gold coins scattered on the ground, turn right toward the room beside the giant guard statue. You need to enter this room twice to get two Primal Embers.

Related: Which characters is the Missive Windspear good for in Genshin Impact?

As soon as you enter, turn right to find a Control Unit—interact with it to open the door leading further in. Once you're in the hallway, immediately turn right to find a wall with a carving resembling an Anubis. Climb the wall to find the device, and interact with it to release a Primal Ember. This is optional, but you can return to the hallway and turn left to find another Control Unit to open a gate leading toward the entrance. Make sure to lead the Primal Ember to its post in the main room.

Return to the entrance of the room on the right. This time, turn left to enter a hallway with a Replicator Keystone and Primal Gate, but ignore them and follow the path forward. You'll find an opening with a pathway on the left, but be careful because the floor beside it is a disappearing floor. Enter the path to the left to find a Seelie. Follow it and climb the wall to find another device, which you need to interact with to release a Primal Ember. Follow the Primal Ember to its post in the main room.

Room on the left

From the main room with gold coins scattered on the ground, turn left toward the room beside the giant guard statue. You need to enter this room twice to get two Primal Embers.

Once you enter the room, dash through the blue beam and turn left to find a locked Chest. Defeat the Primal Construct to loot the Common Chest. Then turn left once again to find a wall with a carving akin to an Anubis. Climb it to find the device, which you must interact with to release the Primal Ember. Make sure to follow it to its post in the main room.

Head back to the entrance of the room on the left. This time, turn right to enter another hallway. You need to turn right at the first entrance that you see, leading you to a room where you'll find a wall with a carving of an Anubis.

Approach the wall and use the sand current to propel you upward, where you'll find a device. Interact with the device to release a Primal Ember, and follow it to its post in the main room. Once you have all four Primal Embers in place, a small cutscene and dialogue will play out before you'll be prompted to continue exploring the Mausoleum.

For more Sumeru desert exploration guides, check out How to unlock the Garden of Endless Pillars Domain in Sumeru in Genshin Impact and Genshin Impact: Secret of the Scorching Desert walkthrough – Mysterious Ruins Domain guide.