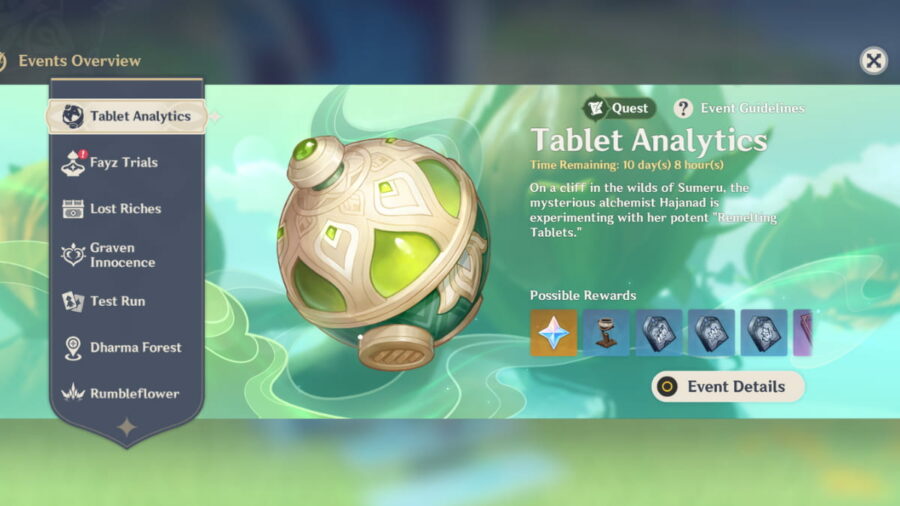 The Genshin Impact Tablet Analytics event runs from Sept. 15, 2022, to Sept. 26, 2022. It introduces players to another desperate researcher named Hajanad, who wants to prove the efficacy of her invention with the help of the powerful Traveler.

How to unlock the Tablet Analytics event in Genshin Impact

Tablet Analytics is open to all players with Adventure Rank 20 and above. While not an official requirement, you must have access to Sumeru, as the event Domain is between Sumeru City and Gandha Hill. Once you meet the level requirement, you'll automatically get an Event Quest called The Cliffside Weirdo and a Risky Study?, where you must talk to a researcher named Hajanad to access the event Domain.

Related: Collei’s Special Dish Recipe and how to cook it in Genshin Impact

How to complete the Tablet Analytics event in Genshin Impact

Teleport to the event Domain through the Tablet Analytics Waypoint between Sumeru City and Gandha Hill, where you'll find Hajanad and the event Domain. Four stages unlock every two days.

Setting up before battle

Upon choosing a stage, you can view Monster List on the right side of the screen. Each stage consists of three rounds divided by time limits, and the enemies listed under each round will continuously appear until the next round starts. You can change teams between rounds.

If you switch to the Remelting Effects tab, you can view all the buffs you can get by using the Remelting Device in battle. And at the bottom of the screen, you can choose your Score Multiplier (x1, x2, and x4)—a higher Multiplier also increases the difficulty of the battle.

Once you click Single-Player Challenge, you can set up the team for Round 1. The game provides you with four Trial Characters, but you're not obligated to use them if you choose not to. We recommend picking a team that can benefit from the Round 1 Remelting Effects and are strong against the enemies' Elements. Keep in mind that you can change teams between Rounds. You can reuse characters you used in previous Rounds.

Your goal is to defeat enemies and accumulate points continuously. You need 4,000 points across all three rounds to get all rewards. Each round takes two minutes to complete, which you can track via the timer at the top of the screen. After two minutes, you'll be prompted to update your party setup to suit the enemies and Remelting Effects for the next round.

Every 15 seconds, you can use the Remelting Device by clicking on it at the bottom of the screen (T button for PC), which will give you one or more buffs based on the Remelting Effects for the specific round. You can view the active buffs on top of your HP bar, but they are not permanent and will eventually wear off. Defeating enemies can decrease the Remelting Device's cooldown by up to five seconds, but remember that you can't control which buffs you get as they're random.

Head to the event menu and select Tablet Analytics. Click on the Event Details to claim rewards for the stages that you've completed. You only need a cumulative score of 1,000 points per stage to get the Primogems and 4,000 for all the rewards.

Check out our guide on All 8 Eremite camp locations in Sumeru in Genshin Impact to complete a Hidden Exploration Objective in Sumeru.