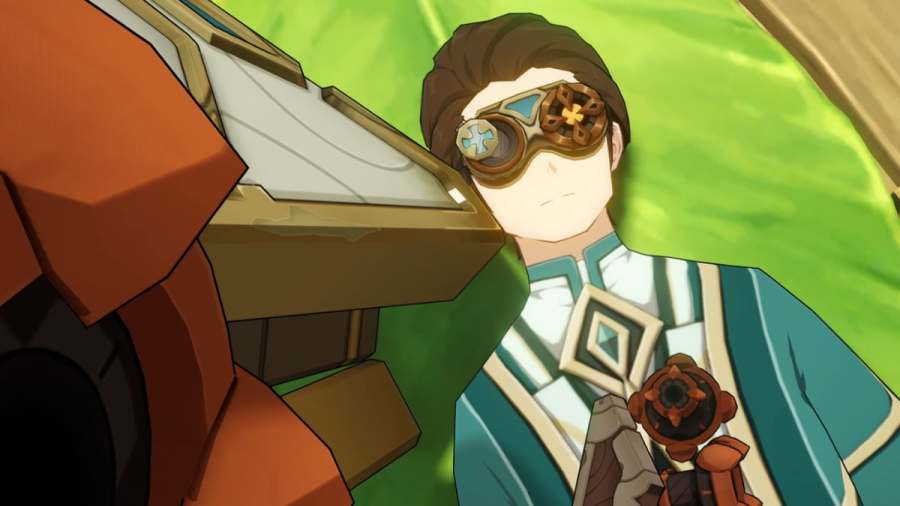 Tighnari's Story Quest, the Vulpes Zerda Chapter: Act I - The Unanswerable Problems details your bittersweet encounter with a mechanical crab who an Akademiya researcher created through the illegal study of mechanical lifeforms. The quest is divided into four parts, and the third is called Heart of the Machine, where you must explore a Domain called The Contamination's Source.

Before entering, prepare a battle-ready team, as enemies are waiting for you inside. Once you're inside, defeat all of the Ruin Sentinels in the clearing to open up a path leading further in. Follow the path and head to the next clearing housing the Ley Line extraction machine, where a dialogue with Tighnari will prompt.

Follow the quest marker toward the next tunnel, but keep your eyes peeled. You'll find a Common Chest under some yellow flowers. Make sure to loot it, as you can't return to the Domain after exiting. Once that's done, follow the path toward the dead researcher's body to prompt dialogue.

Likewise, do the same for the third area to collect the last document, but don't forget to loot the Common Chest in front of the machines.

Related: How to unlock the Song of Night and Dawn hidden Achievement in Old Vanarana in Genshin Impact

Beside the Common Chest is a Clusterleaf of Cultivation. Apply Dendro to the plant to summon a Four-Leaf Sigil. Don't worry if you didn't bring a Dendro character, as Tighnari will join your team as a trial character. Use the Four-Leaf Sigil to propel you upward, then glide toward the brown patch on the ground. The ground will break, and you will fall, so be careful about fall damage.

Follow the path laid out by the invisible bridges and use the quest marker as a guide to ensure you're going in the right direction. Don't worry if you fall, as you can try as many times as you need. Avoid the bubbles toward the end of the path! Once on the last platform, use the Four-Leaf Sigils to head to a high point, then carefully plunge down toward the clearing. Defeat the Ruin Sentinels to prompt a small cutscene with Tighnari.

Once that's done, follow the path back to Karkata, but keep your eyes peeled as there's a Common Chest that you can loot along the way. After the cutscene, follow the path to the entrance to complete the Domain. You'll be rewarded with a Precious Chest. Exiting will continue the next part of the Story Quest.

Check out our Genshin Impact Afratu’s Dilemma World Quest guide to stop the Ruin Golem from taking lives in the desert.