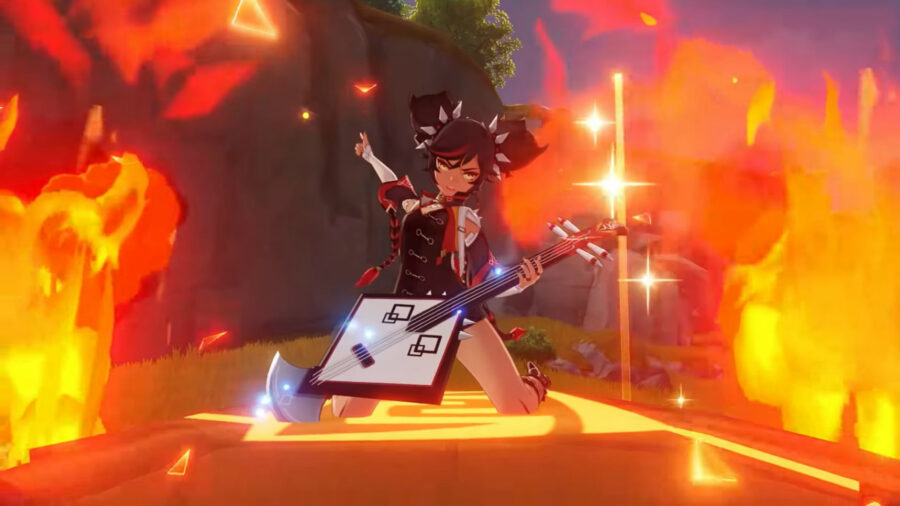 We have made a new format for all of this information, and it includes everything you need to know for Xinyan!

Here's a guide giving more information on what fiery Xinyan, one of the two characters coming can do!

Xinyan is a 4 Star Pyro element user who wields a Claymore as a weapon. She is coming to Genshin Impact on December 1, in a banner with Geo 5 Star user Zhongli, one of the other characters that were planned for Version 1.1. She's not yet in the game as an NPC (Non-Player Character), though she is mentioned; thank you for the YouTube comments section for this one! She is a well-known performer in the region of Liyue, where during the climax of her show, she uses pyrotechnics. Due to this, she was banned by the Liyue authorities to ensure their people's safety.

Xinyan brandishes her instrument, dealing Pyro DMG on enemies in proximity, forming a shield made out of her audience's passion.

By strumming rapidly, Xinyan launches nearby enemies and deals Physical DMG to them, hyping up the crowd. The sheer intensity of the atmosphere causes explosions that deal Pyro DMG to everyone in proximity.

For Xinyan's materials needed for Ascension and leveling up Talents, head to our Farming for Xinyan Guide, where we have a detailed guide on where to get the materials!