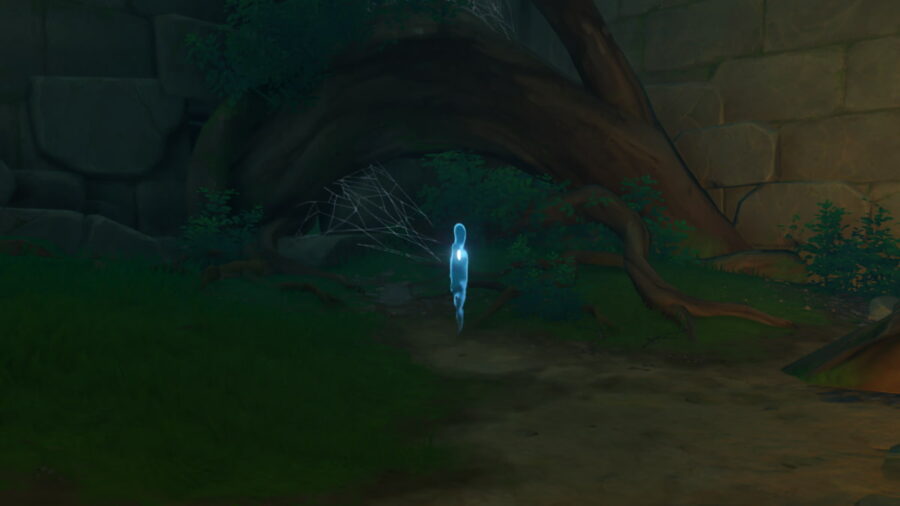 After completing The Sun-Wheel and Mt. Kanna, the Thunderbird's curse will be lifted from Tsurumi Island, prompting faceless illusions to appear. Just as they're about to depart to the golden land of dreams, talking to the illusions of Tsurumi's once-residents will give you an opportunity to grant them one last wish.

Abe, who's a little too fond of mushrooms, is one such illusion that you can lend a hand to. Start by heading to the underground tunnel in the depths of Shirikoro Peak. His exact location is circled in the image below.

There, you'll find five Fluorescent Fungi. Pick all of them up to prompt Abe to appear, initiating a dialogue with him. He's annoyed that you picked the mushrooms and tells you to stop.

Related: Where to farm Fluorescent Fungus in Genshin Impact?

Wait two real-time days (or more) and head back to the same area—the Fungi should have respawned by that point. Pick all five to prompt Abe to appear once again. He tells you that his time is almost up and that he'd love to see what mushrooms beyond the Sea of Fog look like.

After the dialogue, Abe will appear behind you. Speak with him again and give him x3 Philanemo Mushroom and x3 Mushroom, both of which are easily farmable at Springvale, which is located in Monstadt. Doing so will complete this Hidden Exploration Objective and reward you with an Exquisite Chest.

While you're in the area, consider working on other nearby quests. Check out our guide on How to complete The Saga of Mr. Forgetful World Quest in Genshin Impact.

Genshin Impact: How to build Bennett as a Support or DPS

How to beat the Raiden Shogun in Genshin Impact

Who are the Seven Archons in Genshin Impact?