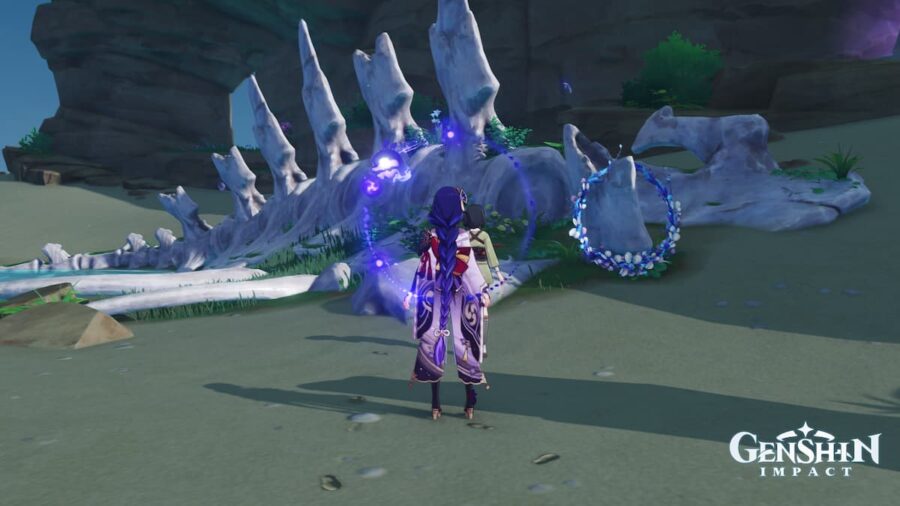 Watatsumi Island is filled with mysteries by the sea. The Solitary Sea-Beast World Quest introduces players to the Umibouzu—large sea creatures treated with polarity by neighboring villages. This heartwarming quest brings together Kumi, a girl from Inazuma, and Anisa, a researcher from Sumeru, as they bring closure to the death of Kumi's childhood best friend.

The quest doesn't automatically appear in the Quest menu, so start the quest by heading to the southeast of Mouun Shrine, located in the western part of Watatsumi Island. There, you'll meet a troubled girl named Kumi standing beside a giant carcass.

Talk to her to learn that the carcass is actually that of her childhood friend, Kuntira, an Umibouzu who she believes lived a very lonely life. Kumi wants to offer Kuntira a wreath but needs your help to gather Sakura Blooms. After gathering three Sakura Blooms from Thunder Sakura, return to Kumi and give her the flowers.

Related: How to farm Sakura Blooms in Genshin Impact

Kumi will then tell you that there's been frequent Hilichurl activity on the west beach. She'll ask you to check in on Anisa, a Sumeru's oceanographic society researcher who went to that area and hadn't come back. The quest will direct you to the right location.

Defeat the Hilichurls to save Anisa. Afterward, speak with her, and she'll ask you to solve the puzzle of the Watatsumi statue right in front of her.

Doing so will unlock the Watatsumi Statue. Offer prayers to the Statue before interacting with the light nearby. After, a Light-Up Tile Puzzle will appear. Follow this route to complete the Puzzle:

Follow the tiles and ensure that you don't step out of them, as that will disperse the Puzzle, and you'll have to start all over again. You'll reach a dead end after reaching the tile beside the Watatsumi Statue.

Solve this issue by interacting with the Statue again, and a new tile will appear to the left (marked with a yellow circle in the image above). It will allow you to continue the route, which ends at the tile with an aura, to complete the Puzzle! You'll be rewarded with an Exquisite Chest.

Talk to Anisa, who'll tell you about her interest in marine biology. This will prompt her interest in Kuntira. Head back to Kumi, who'll put the wreath she made on Kuntira's carcass, and the two girls will start a conversation.

Read their story to complete the quest, which will unlock the achievement A Mermaid's Tale.

For help with clearing the rest of Watatsumi Island, check out our All Electroculus Locations in Genshin Impact guide on Pro Game Guides.