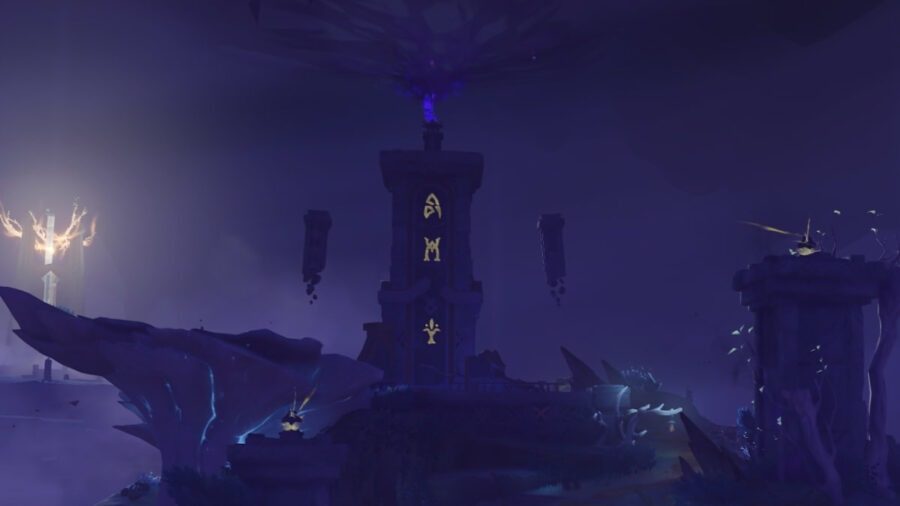 The Three Realms Gateway Offering is a 40-day event that runs from Feb. 17, 2022, to Mar. 30, 2022. It's set in Enkanomiya, the region hidden beneath Watatsumi Island. The core Event Questline, the Aphotic Diffusal, involves clearing up the darkness from three islets in the region. After completing Three Realms Gateway Offering: Part I, you'll be prompted to start Part II.

Before proceeding, make sure that your Bokuso Box is at least level six. You can complete the quest without meeting this prerequisite, but you won't be able to unlock any of the Teleport Waypoints in the area and may not be able to counter the Corrosion Intensity.

Heading to the Quest Location

Start by heading to the area circled in the image above in the Dainichi Mikoshi. You'll find an Enkanomiya Phase Gate, which will propel you toward the Evernight Temple. Once there, continue traversing the area using Enkanomiya Phase Gates, and you'll encounter a barrier surrounded by three Seelie Posts.

Solve the puzzle by guiding the first two nearby Seelies back to their Posts, then use Elemental Sight to find a nearby Electro Rock Pile, which you can break with heavy Attacks to reveal the last Seelie.

Each Seelie Post will grant you one Common Chest. Once all three are done, the barrier will drop. Interact with the Challenge Trial to spawn two waves of enemies: Bathysmal Vishaps and Kairagi. You'll be rewarded with a Luxurious Chest, and a school of Ghostfish will appear.

Jump to the middle of the Ghostfish to fly upward, which will allow you to unseal the nearby Teleport Waypoint (requires Bokuso Box level 6). From there, follow the quest marker to the actual school of Ghostfish that will take you to the upper-right islet: the Yachimatahime's Locus.

Upon making it to the final quest location, you'll encounter a Teleport Waypoint that can be unsealed with five Tokoyo Legumes and Aphotium Ores (requires Bokuso Box level 6). You'll also find an Electro Seelie beside an Enkanomiya Phase Gate. The Seelie will guide you to the rotating mechanism puzzle, so keep following its lead.

In total, there are two battles along the way: one against Ruin Sentinels and another against Shadowy Husks. Make sure to engage in both to obtain Husk Gems, which will be used for the puzzle later on.

The Electro Seelie will eventually lead you to the rotating mechanism puzzle—similar to the previous quest. Your goal is to activate the three mechanisms with eight Tokoyo Legumes, eight Aphotium Ores, and 10 Husk Gems. Then, rotate the mechanisms until the giant structure reflects the same order of symbols as the nearby tablet. Reference the image above for the right order.

Once that's done, a cutscene will play, and you'll be prompted to climb to the top of the giant structure and activate the Bokuso Box to complete this subquest.

Check out our guide on How does the Corrosion mechanic work in the Genshin Impact Three Realms Gateway Offering Event to help you traverse the void-filled Enkanomiya.