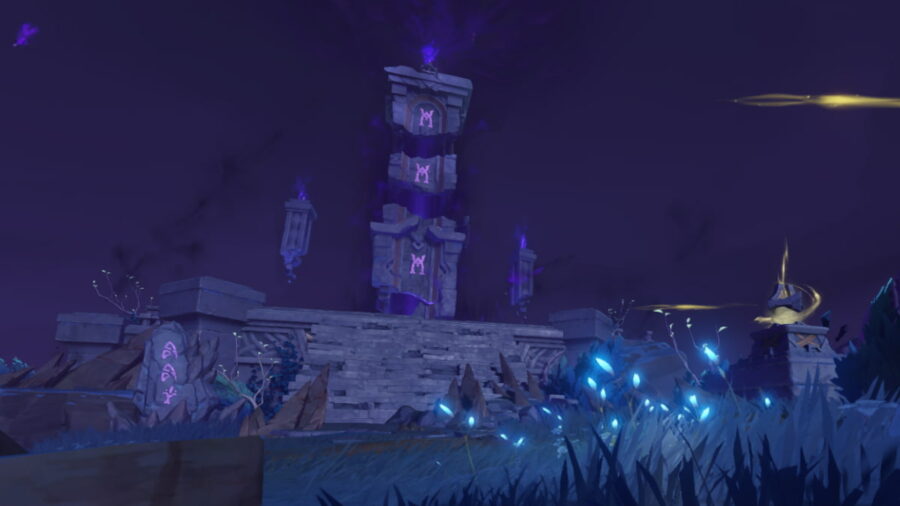 The Three Realms Gateway Offering is a 40-day event that runs from Feb. 17, 2022, to Mar. 30, 2022. It's set in Enkanomiya, the region hidden beneath Watatsumi Island. All players who have completed the following prerequisites are eligible to participate:

How to Start the Quest

After completing the first part of the event, where the masked Shine Maiden, Tsumi, gives you the Bokuso Box, the overarching Event Quest called Aphotic Diffusal will start. The Three Realms Gateway Offering: Part I is a subquest where you must cleanse the darkness in one part of the region.

Your goal is to make it to the upper-left corner of Enkanomiya, where the Yachimatahiko's Locus is normally located. First, level up your Bokuso Box through the Statue of the Vassals to allow you to unseal Teleport Waypoints. Then, head to the area circled in the image below.

There, you'll find an Enkanomiya Phase Gate. Approach it, and you'll be transported to the upper-left islet: The Narrows. The quest marker will prompt you to find the school of Ghostfish. However, before you do that, it's highly recommended to first activate the Teleport Waypoint in The Narrows for easier transport and collect seven Tokoyo Legumes and Aphotium Ores.

Once those are done, jump into the center of the school of Ghostfish and let it transport you to the islet on the far upper left of the region: the Yachimatahiko's Locus. Don't click on anything as you're being transported to prevent falling.

Upon landing in the Yachimatahiko's Locus, unseal the Teleport Waypoint and follow the quest marker to the location of the puzzle. Make sure that the Bokuso Box is equipped the entire time. You'll find three mechanisms cloaked in darkness. Interact with them and insert five Tokoyo Legumes, five Aphotium Ores, and 10 Husk Gems (can be obtained from the locked Chest and enemies in the area) to proceed.

Once the mechanisms are unlocked, you need to interact with them to rotate the segments that make up the giant structure in front. Your goal is to rotate until the order of the symbols matches that of the nearby tablet, as pictured above.

If you accidentally rotate too many times, just keep rotating until the correct symbols show up. Once that's done, a cutscene will play, and you'll be prompted to climb the giant structure.

You can use Geo constructs or Wind Currents to lift you up, or simply climb from the protruding section of the structure. And once you reach the top, use the Bokuso Box to remove the darkness from the monument, completing this subquest.

Check out our guide on How to solve the Electro Monument and Seelie Luxurious Chest puzzle in Genshin Impact — Three Realms Gateway Offering Event to score Light Realm Sigils to upgrade your Bokusu Box.

How to complete the Three Realms Gateway Offering: Part I Event Quest in Genshin Impact