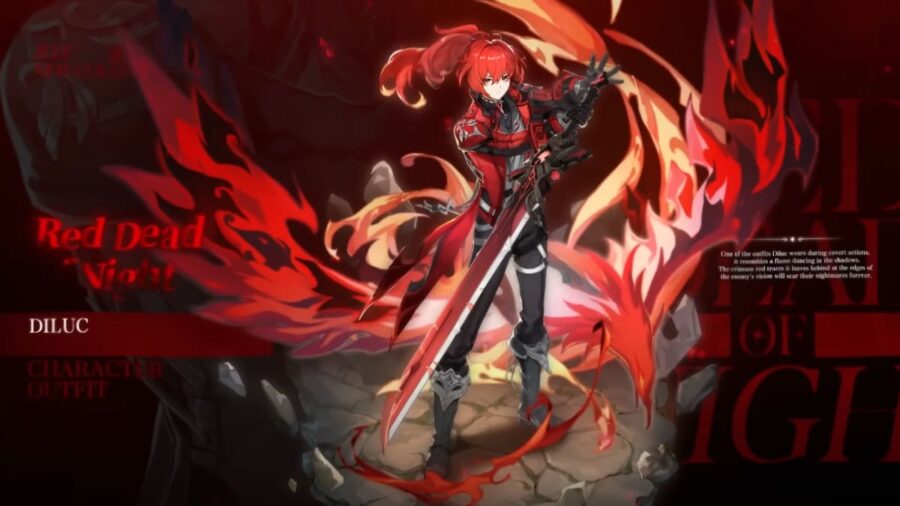 Being a character collection game, Genshin Impact naturally enables players to purchase cosmetics to change the look of their favorite waifus and husbandos—and being one of the first five stars, Diluc is no exemption. The owner of the Dawn Winery is one of Genshin's most recognizable characters, with fiery red hair and a Pyro Vision that can summon a giant Phoenix with his Burst.

Diluc's skin is called the Red Dead of Night, an ensemble used for performing various covert operations. Open the Paimon menu, select Shop, and head to the Character Outfits section to find the Outfit, which can only be purchased using 2,480 Genesis Crystals.

During the Version 2.8 Summer Fantasia update that runs until August 24, 2022, the skin is discounted for 1,980 Genesis Crystals. Diluc's Outfit costs significantly more than other five-star Genshin Impact skins as his skills are also reskinned, bringing more visual consistency between his new look and move sets.

Related: How to get Ningguang’s Orchid Evening Gown skin in Genshin Impact

How to get Genesis Crystals in Genshin Impact

Genesis Crystals can be purchased from the Crystal Top-Up section of the shop using real-life money. Unfortunately, there's no way to get this premium currency anywhere in the game for free, and it's also not possible to convert Primogems and Fates for it.

If you're a low spender, you can get the best bang for your buck by purchasing the $5 Blessing of the Welkin Moon, a monthly card that grants a 300 Genesis Crystal bonus on top of a daily Primogem payout. Since Genshin Impact rarely releases skins, you'll have enough time to save up for all of them using this method.

Check out our guide on How to get Keqing’s Opulent Splendor skin in Genshin Impact to get another five-star Outfit in the game.