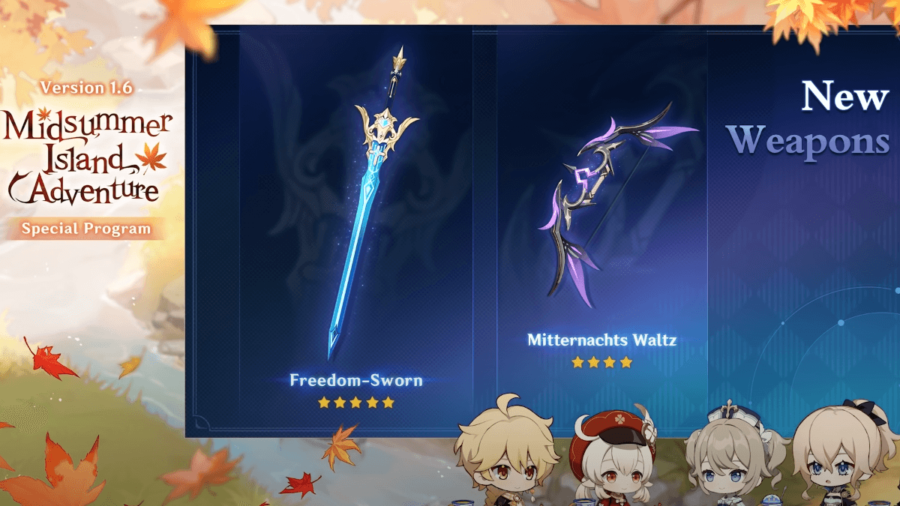 Genshin Impact v.1.6 is fast approaching, and with it comes new obtainable items like the two featured weapons, Freedom-Sworn and Mitternachts Waltz. Both weapons are event-exclusive, meaning they will only be offered for a limited time. They are not available to pull from the standard wish banner, Wanderlust Invocation.

Note: As always with unreleased content, these details are liable to change.

A straight sword, azure as antediluvian song, and as keen as the oaths of freedom taken in the Land of Wind.

Freedom-Sworn is a new 5-star sword featured in the 1.6 Epitome Invocation wish banner, in which it receives a significant drop-rate boost. To cast Wishes, you’ll need to acquire Fates, most commonly done by converting your hard-earned primogems.

Freedom-Sworn will become available along with Kazuha, so it's fitting that this sword complements what we know about Kazuha's abilities. For example, Kazuha has a special Plunging Attack move that Freedom-Sworn will make even stronger through its passive traits.

A bow painted the color of sin and nights of wild fantasy.

Mitternachts Waltz is a new 4-star bow featured in the 1.6 Epitome Invocation wish banner, in which it receives a significant drop-rate boost.

Everything about this bow simply screams "Fischl." With Oz on the field, hitting foes with Elemental skills is an automatic given, meaning that Fischl's normal damage output would get a 20 percent increase. Mitternachts Waltz would be a great choice for any bow-wielder, but we all know who it's really intended for.

Both new weapons are only available in the v.1.6 Epitome Invocation wish banner. As featured weapons, they receive a drop-rate boost that raises the standard chance of obtaining higher quality items.

Pity guarantees work for weapon banners just like they do for characters, except the number to trigger a pity 5-star wish for weapons is 80 instead of 90. If you cast 79 wishes in Epitome Invocation and still haven’t received a 5-star weapon, your next pull is guaranteed to grant you one.

For more information on all the latest Genshin Impact news, check out our Genshin Impact 1.6 Leaks, New Characters, and Release Date article. We've also got you covered on codes to redeem for free primogems, and leaks for upcoming banners!