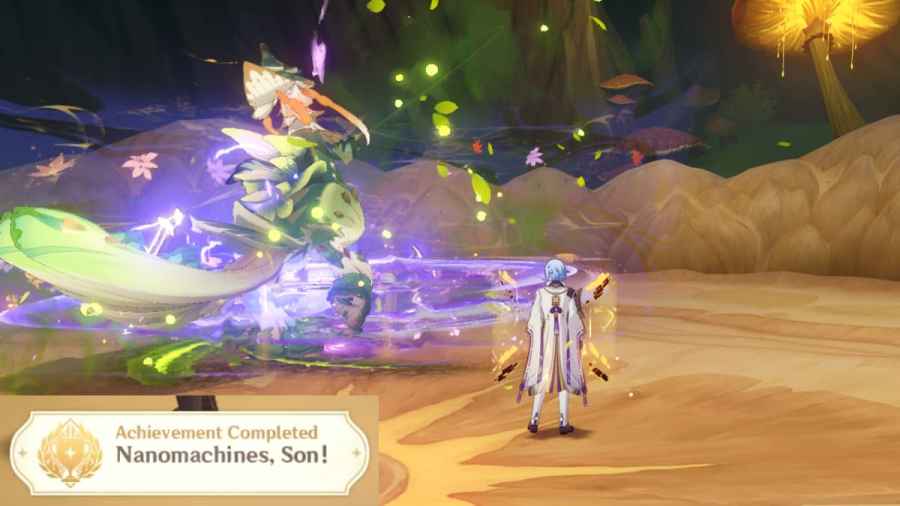 The key to this Achievement is understanding the Jadeplume Terrorshroom's attack pattern. It has a Rage meter that fills up when it comes in contact with Electro. Once filled up, the boss will begin thrashing around, unleashing powerful strikes before giving up and falling to the ground. With this attack pattern in mind, your goal is to defeat the boss in the small window after filling up the Rage meter and before it falls to the ground.

Related: How to get the Opportunistic Gain Sumeru Hidden Achievement in Genshin Impact

The best way to guarantee this Achievement is to avoid using your Electro character until the Jadeplume Terrorshroom's HP is around 30 percent or lower (depending on your team's strength). Once you've shredded most of its HP, start attacking the boss with Electro to fill up the Rage meter. This way, it will start unleashing powerful attacks when its HP is very low, guaranteeing that you defeat it before it falls to the ground. If you successfully defeat the Jadeplume Terrorshroom within this small window, you'll get the Nanomachines, Son! Hidden Achievement.

Check out our guide on How to get The Smell of Grilled Mushrooms in the Morning Sumeru Achievement in Genshin Impact to unlock another Jadeplume Terrorshroom Achievement.

How to get the Nanomachines, Son! Sumeru Hidden Achievement in Genshin Impact