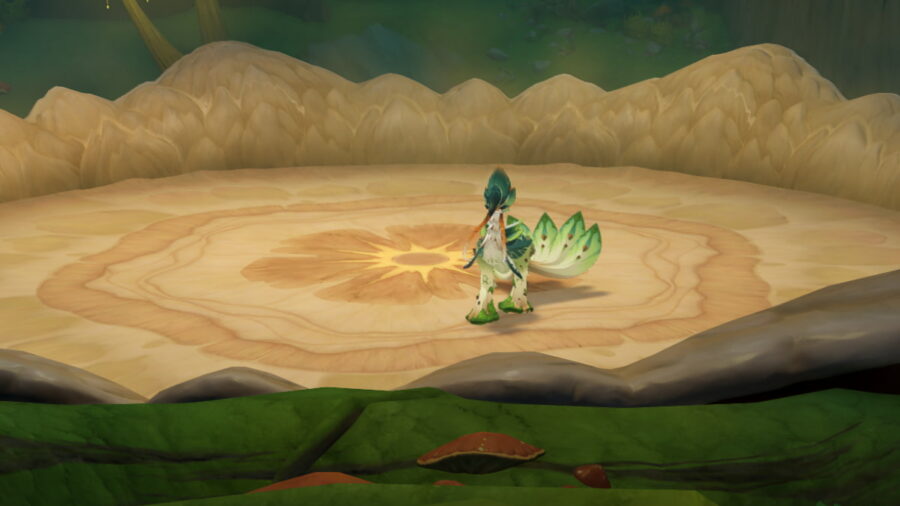 Light up the Sumeru World Map by interacting with the Statue of the Seven in the Vissudha Field, then head to either of the cliffs circled in the image below. From there, glide toward the portal in the sky to be transported to the hidden area where the Jadeplume Terrorshroom resides.

Once you’re in the Jadeplume Terrorshroom’s territory, you can unlock the Teleport Waypoint inside, so you can easily teleport to the area when farming in the future.

Related: How to get Thunderclap Fruitcore in Genshin Impact

The Jadeplume Terrorshroom is a fairly straightforward Normal Boss without particularly annoying mechanics like the Golden Wolflord. It does quite a bit of damage with its physical attacks, but they’re easy to dodge by running or putting up a shield. The Jadeplume Terrorshroom is particularly susceptible to Quicken and Aggravate Reactions, which are caused by combining Dendro and Electro. These are able to disable the Boss, rendering it immobile on the ground. We highly recommend using this Reaction if you want the battle to end as quickly as possible. Once the battle is over, you need to spend 40 Original Resin to claim rewards.

Check out our guide on How to get rid of Withering in Sumeru in Genshin Impact to save the region's biome.

How to get Majestic Hooked Beak in Genshin Impact