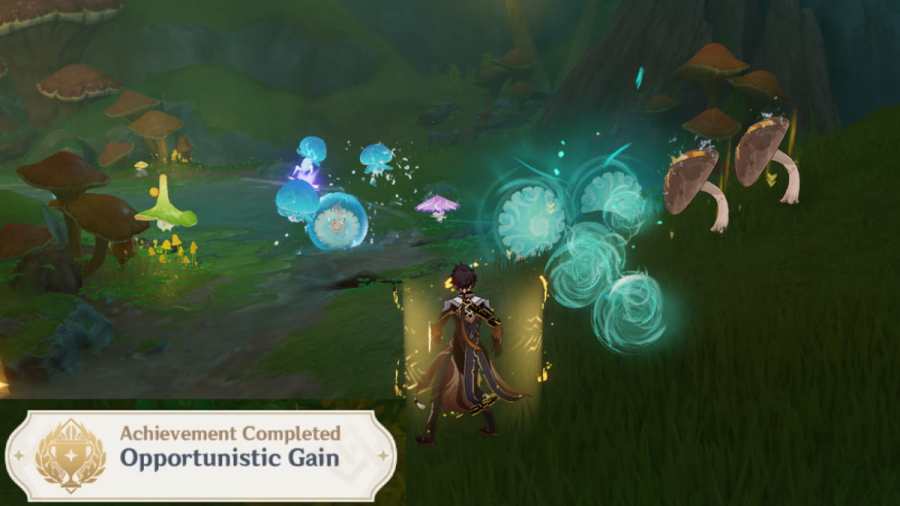 Opportunistic Gain is a Wonders of the World Achievement that you can obtain by watching the infighting between fungi. You must essentially trick the hordes of fungi under the Jadeplume Terrorshroom's cave into attacking each other.

Start by heading to the Jadeplume Terrorshroom's cave west of Vanarana, either via the Teleport Waypoint or the portal in the sky. Once inside, you'll notice that the clearing housing the boss is elevated, and you can fit between the plants to plunge deeper into the cave.

Related: How to get the They Enter the Flow Sumeru Hidden Achievement in Genshin Impact

The field will get chaotic once the fungi are bunched together as they'll all try to attack you, but what's important is that their skills will eventually start affecting each other. In particular, the Floating Hydro Fungi's bubble can trap fellow fungi. So simply wait for an unfortunate fungus to get trapped inside the bubble to get the Wonders of the World Achievement called Opportunistic Gain.

Check out our guide on How to get The Smell of Grilled Mushrooms in the Morning Sumeru Achievement in Genshin Impact to unlock another Achievement in the same area.