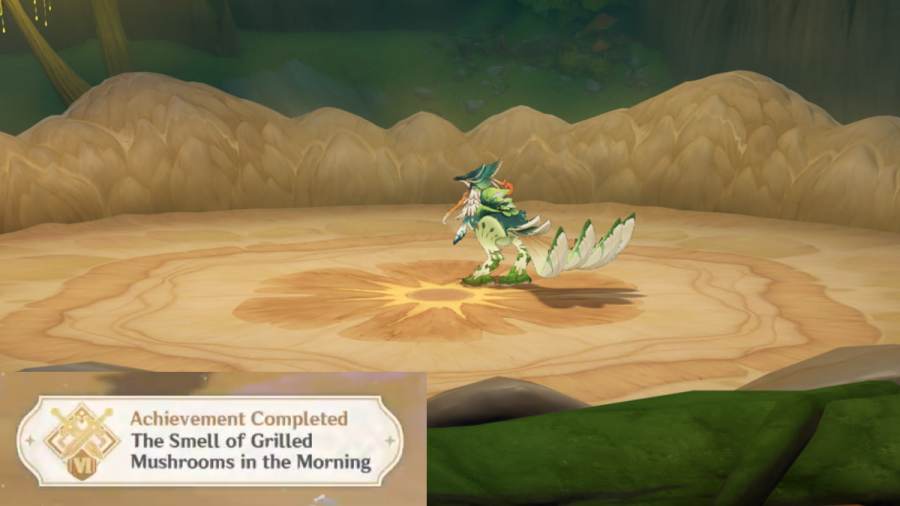 How to unlock The Smell of Grilled Mushrooms in the Morning Challenger: Series VI Achievement in Genshin Impact

Head to the Jadeplume Terrorshroom via the Teleport Waypoint in its hidden cave west of Vanarana, or through the portal in the sky if it's your first time visiting it. You need to have a character that can apply Pyro in your team, as you need to place the boss in the Burning state.

Since the Jadeplume Terrorshroom is a Dendro boss, applying Pyro to it immediately triggers the Burning effect. You can ensure that the Pyro symbol should appear under its health bar. While the boss is Burning, it will use a skill that releases three blobs onto the ground (pictured above). These will transform into fungi. You need to defeat six of them to get the Achievement.

Since the boss only releases three fungi at a time, you need to trigger its Burning state twice within the same challenge, so don't kill it too quickly. Additionally, the boss won't immediately release fungi just by being in the Burning state. You may need to keep applying Pyro until it eventually releases the fungi. Once all six fungi have been defeated, you'll get the Challenger: Series VI Achievement called The Smell of Grilled Mushrooms.

Check out our guide on How to unlock the Establishing a Beachhead Sumeru Hidden Achievement in Genshin Impact to get another boss-related Achievement.