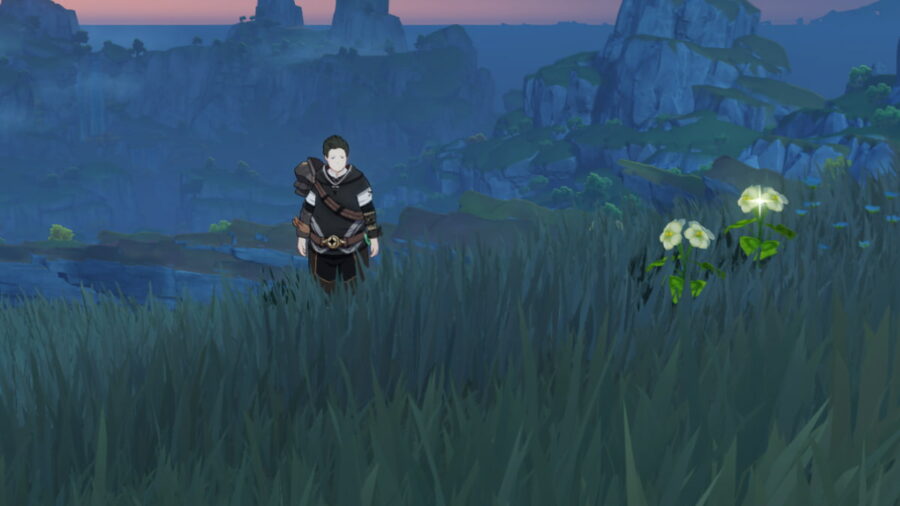 A Cliff-Side Hero's Past is a World Quest you can accept in the Cinnabar Cliff in The Chasm. A blue exclamation mark will not appear on the World Map, so you need to manually trigger it.

Start by heading to the area circled in the image below. A dialogue will prompt as you're getting closer to the area. Keep in mind that the Cinnabar Cliff has multiple layers—you need to get to the very top to find this World Quest.

You'll encounter an NPC named Tang Wuchou. Three identical-looking Qingxin surrounds him, but one of them is actually a Flower of Farsight. Pick it up to initiate A Cliff-Side Hero's Past.

Related: Where to get the Echoes of an Offering Artifact Set in Genshin Impact

He tells you that he obtained it from Old Chou. Follow the quest marker a few hundred meters down to meet the old man. He will give you an opportunity to dig up treasure from his field.

You need to dig until you obtain a Bag of Ornaments. Once you have it, speak to Old Chou and respond with Yeah, let's go back to look for Tang Wuchou... to get teleported to Tang Wuchou's location.

Speak with him to complete the World Quest. You'll obtain the Wonders of the World Achievement called Jack of No Trades.

Check out our guide on How to complete the Stolen, by the Rightful Owner World Quest in Genshin Impact to clear more Chasm content.