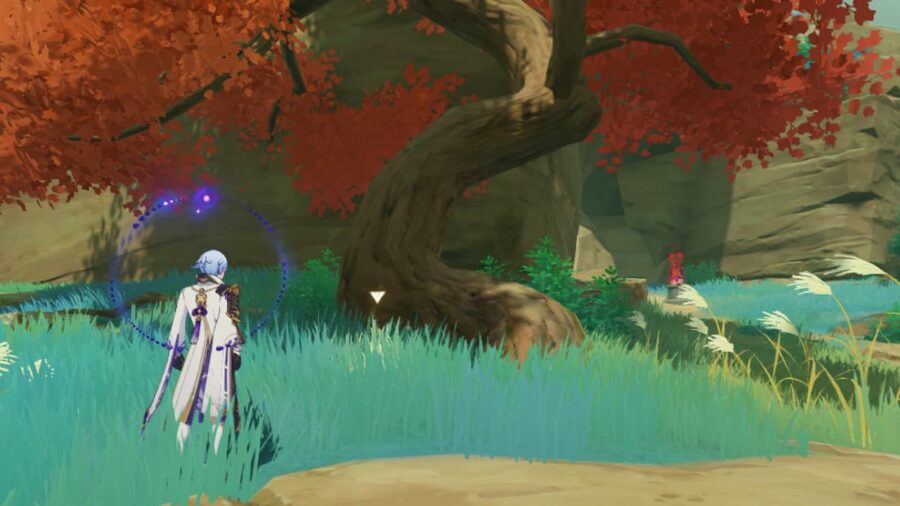 To unlock this World Quest, you first need to finish the entire Golden Apple Archipelago Event Questline, which ends at part six: Like Rhyme and Song, the Summer Reverie. Since The Treasure of the Four Skerries is a hidden quest, it will only appear in your quest menu after completing the first segment below.

Related: How to switch the Minacious Isle layout using the Place in Water feature in the Genshin Impact Summertime Odyssey event

Part of the unlock requirements and the first part of this World Quest involves finding three Route Logs hidden around the Golden Apple Archipelago. There are no quest markers to guide you in this segment, so read on to find out where to find them.

Start by heading to the small islet east of the Pudding Isle—its exact location is circled in the image above. Once you get there, climb the mountain and jump down inside to find a locked Common Chest. Defeat the nearby Electro Slimes to unlock the Chest and loot a Quest Item called Route Log: I.

Once that's done, go to Kazuha's Island and Rearrange Bonsai, and select the following:

After Rearranging Bonsai, head to the area circled in the image above in Pudding Isle. You'll find a glowing Investigate spot in front of a red tree. Interact with it to pick up a Quest Item called Route Log: II.

As soon as that's done, return to Kazuha's island and Rearrange Bonsai again. This time, select the following:

After, head to the area circled in the image above in Pudding Isle. You'll find another glowing Investigate spot—interact with it to get a third Quest Item called Sea Route Log. Once you have this item, the game will automatically prompt four segments to show up under The Treasure of the Four Skerries in your quest menu. You can head to any of the three Isles in any order and then complete "Where the Treasure Dwells" last.

Check out our guide on How to unlock and complete A Misplaced Conch World Quest in Genshin Impact – The Scattered Past questline to complete another limited-time questline.