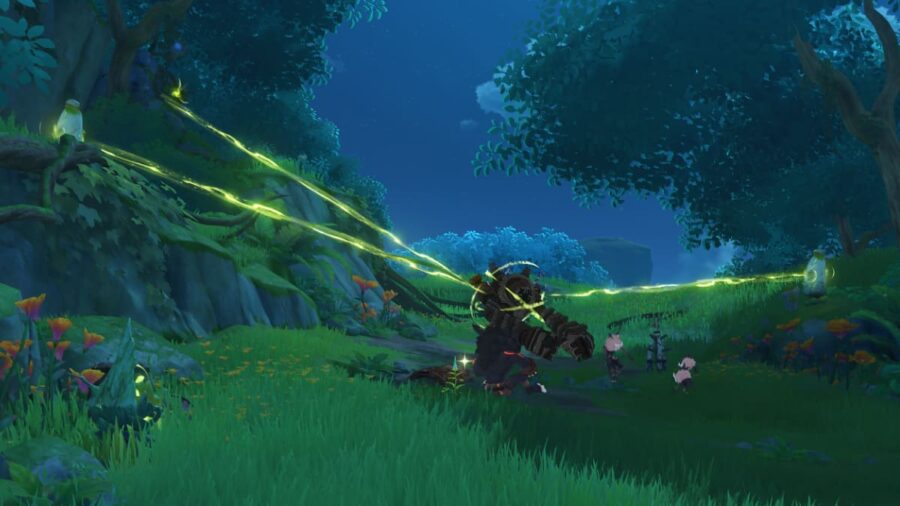 While exploring Sumeru's vast rainforests, you'll occasionally encounter a Ruin Guard or a Ruin Grader sealed by three green lines connected to Stone Pillars. By destroying the seals, you can wake up the Ruin Guard or Grader and get a Chest reward after defeating it. Before starting, make sure to bring a character that can apply Pyro—we recommend using an archer like Amber.

A sealed Ruin Guard or Ruin Grader will look similar to the image below, although there could be a few variations around the region. The green lines either connect to Stone Pillars (small gray rocks) or larger breakable Dendro rocks. Your goal is to destroy all of the Stone Pillars to remove the green lines that are causing the enemy to remain immobile.

Related: How to use Four-Leaf Sigils to explore Sumeru in Genshin Impact

To do so, apply Pyro onto the Stone Pillars to deal damage over time, which you can track through the HP bar that will appear on top of them. Once the HP bar has been depleted, the Stone Pillar will break, likewise removing the seal. Meanwhile, pick up a Dendrograna from a nearby source and attack the center of the Dendro rock to break it and reveal a Stone Pillar, which you should also destroy using Pyro. Once all seals have been removed, the enemy will wake up. Defeat it to get a Chest reward.

Check out our guide on How to solve Sumeru Dendrograna archery puzzles in Genshin Impact to learn more about the region's exploration mechanics.