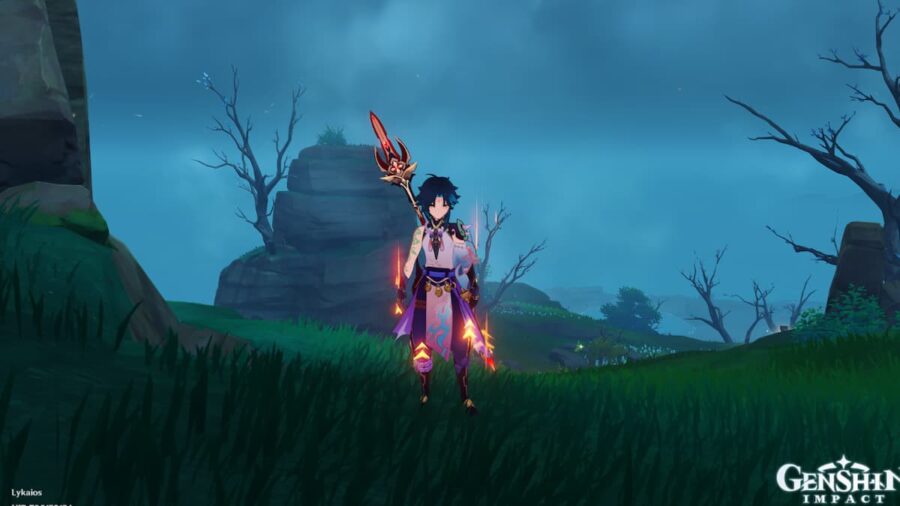 Once you've reached the ceremony, you are tasked to locate three more perches on Tsurumi Island and give your offerings to them. These find these perches you have to wander through the mist on the island, but the game does not tell you the location of three.

On the map, you must go to three locations—Northwest of Autake Plains, Shirikoro Peak, and Chirai Shrine.

Related: How to not get lost in the Fog on Tsurumi Island in Genshin Impact - A Particularly Particular Author World Quest Guide

At this perch, you need to find and defeat all monsters before seeing Ruu at the perch. Touch the perch, and like before, three feathers will fly off.

The first feather is down to the right of the perch, but you have to fight two Geo Rifthounds Whelp to collect it.

The second feather, the easternmost feather, moves away from you when you attempt to pick it up. Follow it, and it'll enter a Thunder Sphere. Nearby is an Electrogranum you can summon to protect you upon entering the Sphere. Enter and destroy the core, and carry on. Near the feather, defeat two Electro Rifthounds Whelps and then pick it up.

The third feather, the westernmost feather, leads you to a Thundercraven Rifthound and one Electro Rifthound Whelp. Defeat them, then carry on heading west until you see a hut. On top of the hut is the feather.

This perch is hidden in a cave to the southeast of the peak. To the right of the cave is a challenge arena. Touch the perch, and three feathers will fly off again.

The feathers cannot be collected straight away as they are all underwater. To drop the water level, you need to collect the three Mysterious Seelie around the area and bring them back to their altars. Upon doing so, you'll be rewarded with an Exquisite Chest and the water level dropping.

Now, all three feathers are next to each other, but the other two will fly away after collecting the first one. Follow them.

The second feather goes behind a stone door that needs to be opened with Relay Stones. You need to place two in the correct locations so the electric current can be conducted to the door. Use the images below for help.

Once done, you get a chest and interact with the door device to open the stone door. Inside defeat a Ruin Guard, and pick up the second feather.

The third feather is nearby. It moves away from you and goes through another stone door. To open it, you have to unlock two devices. One is unlocked by three Mysterious Seelies and the other by Relay Stones. Two of the Seelie's are in plain sight, but the third is behind breakable rocks behind the ruined building. Return all three to their altars and activate the device, lowering the water level.

To unlock the second device, you have to move three Relay Stones in positions so that the electric current can run through all Cumulation Stones. Use the images below for the perfect placement for all Relay Stones.

Use the device and go into the room and grab the third feather. Remember this location, as it's a shortcut to the next perch location at Chirai Shrine.

Backtrack to where to find the third feather and carry on. You'll have to fight two Ruin Hunters, then climb up, and you'll be at Chirai Shrine. Activate the door device, fight a Ruin Sentinel, then follow the White Stormstones to the northeast of the shrine to find the perch.

Like the other three perches, three feathers will fly away, and you have to give chase.

The westernmost feather, all you need to do is defeat Rifthound Whelps near some Discharge/Cumulation stones.

The easternmost feather is down is near where you entered Chirai Shrine from the underground, the room next to where you fought the Ruin Sentinel.

The northernmost feather will glide away from you, follow it into a Phase Gate. Continue following it, and fight a few Electro Whopperflowers and more. Glide down to where the feather is now, close to the perch, and touch it.

Once all three perches have been interacted with, head back to the ceremonial site.