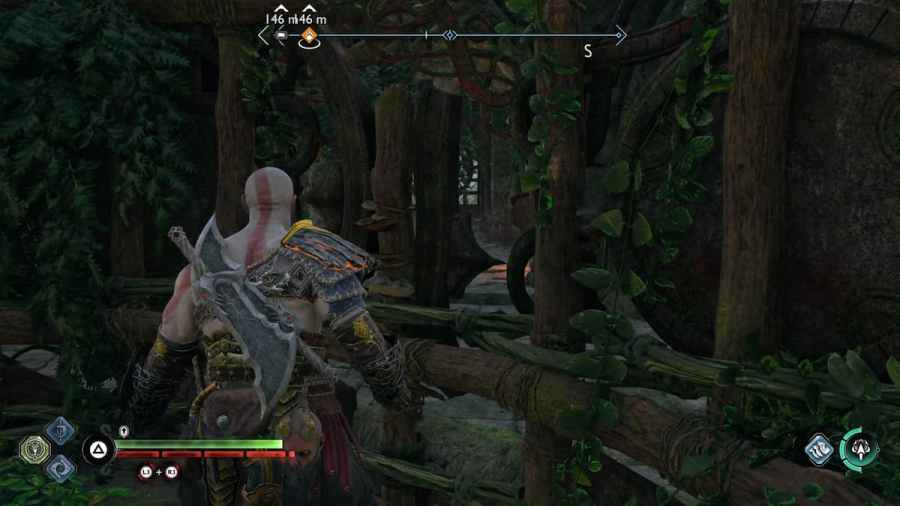 If you're exploring Vanaheim's Crater in God of War Ragnarök and unsure what to do to "lure the drake" in The Jungle, this guide is for you. The Path of Destruction Favor doesn't give you much direction. You have no real direction, just a puzzling wooden cage and a lift. We can help you solve the problem and finish another drake off once and for all. Here's how to do it.

To start this quest, you'll first need to have defeated the Ogre throwing boulders at you. You'll also need to make sure it is daytime in Vanaheim, or visit a Celestial Altar to change the time to day. The grapple point you need to cross the river from the Ogre's island won't appear at night.

To start this quest, pull down the rocks with your Blades of Chaos on the west side of the Ogre's island to reach the point to cross the river. Tread ahead, and you'll spot the Summer Stag from the A Stag for all Seasons Favor. Turn to the north and cross the gap. Keep following the poisonous vines in this area until you reach the root and burn it.

You'll then want to find this white marking on the crumbling wall to the far west. Interact with it to crawl around a tight corner to an open area where a drake has been feeding. The hole in the center of the area is where you're going next. Find the white markings on the side for the point to jump inside.

Once inside, you're trapped! Just kidding. Turn around to see a gear behind you with a wooden panel above it. You'll need to be quick for this next part. Throw your Leviathan axe at the side of the panel painted white. This will raise the cage. Then quickly recall the axe and throw it at the gear to freeze it and prevent the cage from coming back down. Leave your axe in gear, you'll need the cage lifted first for this next part.

Related: Where to find the recipe ingredients in God of War Ragnarok

Walk out of the trap (nabbing the Legendary Chest on your way) to find a few small enemies. Don't fight them. Instead, slowly make your way back to the wooden cage, luring the beasts inside of it. Once they are inside, and you are safely out, recall your axe to trap them. If you miss or have to kill the enemies before they kill you, don't worry. They will respawn where you first found them. After you've trapped them, use the silver chain to lift them into the drake's feeding ground. This will lure the drake in, and you'll just need to return to the feeding ground for a fight.

How to slay the Stag Horn in God of War Ragnarök

The drake you need to defeat is Slag Horn. His fight shares many of the same mechanics as Crag Jaw, a Drake you can find in The Sinkholes. The key in this battle is to take advantage of the yellow, cracked weak points on its front legs. Throw your Draupnir Spear at the points using L2 + R1. They will turn red if hit successfully. After the spear is lodged, press Triangle to detonate the spear and greatly increase Slag Horn's stun gauge. Once stunned, Slag Horn will fall to the ground, and you'll be able to damage his exposed underside. Fighting from a long-range will be to your advantage here, as up close, its attacks will be difficult to parry or dodge.

How to lure the drake in God of War Ragnarök