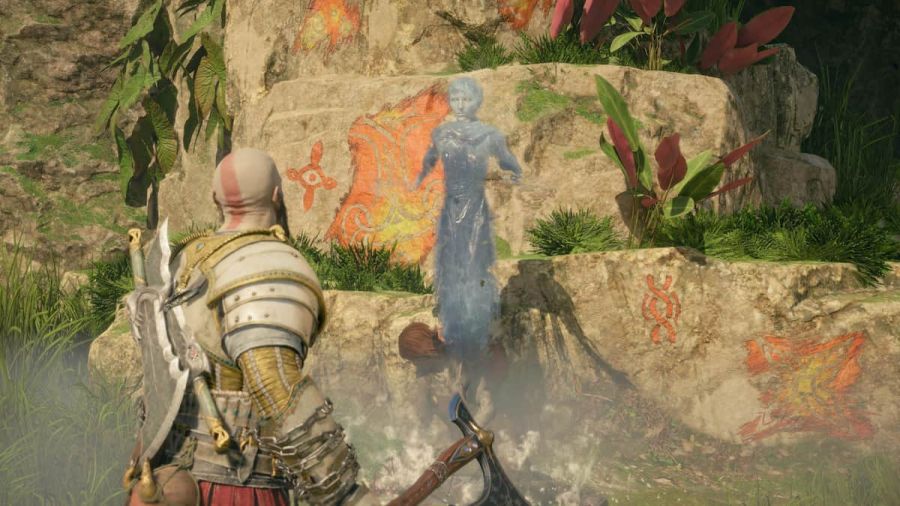 God of War Ragnarok has lots of difficult puzzle-based side quests for players to complete, called Favors. The Favors in Vanaheim can be especially tricky for players. One notable Favor, called Conscience for the Dead, tasks Kratos and Freya with finding and killing some corrupted Vanir that have dabbled with Seidr magic.

To start this quest, players should head to the Cliffside Ruins in Vanaheim and interact with the ghostly figure there. She will instruct Kratos and Freya to track down her corrupted friends and put them out of their misery. Following the steps below will walk players through the rest.

Related: How to complete the Garden For The Dead Favor in God of War Ragnarok

1. To get to the Seidr Fanatics, players need to first clear the path to Goddess Falls. This can be done by heading left from the ghostly figure and climbing up a wall. Continue around the upper platforms until reaching the location shown in the image above.

2. Here, players will need to destroy the bramble using Freya's Sigil magic. This is done by shooting Sigils onto the bramble, then connecting more across the rocks (shown above) until Kratos is able to reach the Sigils with his Blades of Chaos. Once they are close enough, ignite them to remove the bramble.

3. Once the bramble is gone, players should return to the lower floor and climb the chain that fell. This will lead to the location shown above. Kratos should carve the Rune into the wall, which will open up a path leading to the Goddess Falls. Return to the boat and travel down the water to the location that was just opened up.

4. Travel down the Goddess Falls, then left turn to enter The Veiled Passage waterways until reaching the location shown above. There will be a breakable wooden wall in the back left section of the room. Kratos should break through this wall with any of his weapons and then climb to the upper platforms.

5. Once on the upper platforms, Kratos and Freya can clear out the Fanatics and then return to the ghost to complete the Favor. There is a shortcut if you continue on to lower a drawbridge back to Cliffside Ruins and to get Nemean Crush, the first Blades of Chaos Heavy Runic Attack.

Following these steps should lead players to the Seidr Fanatics, and putting them out of their misery will appease the ghostly figure that is trapped in this Realm. After dispelling the brainwashed, Kratos and Freya can return to the quest giver to send her on her way.

Where to slay the Seidr Fanatics in God of War Ragnarok