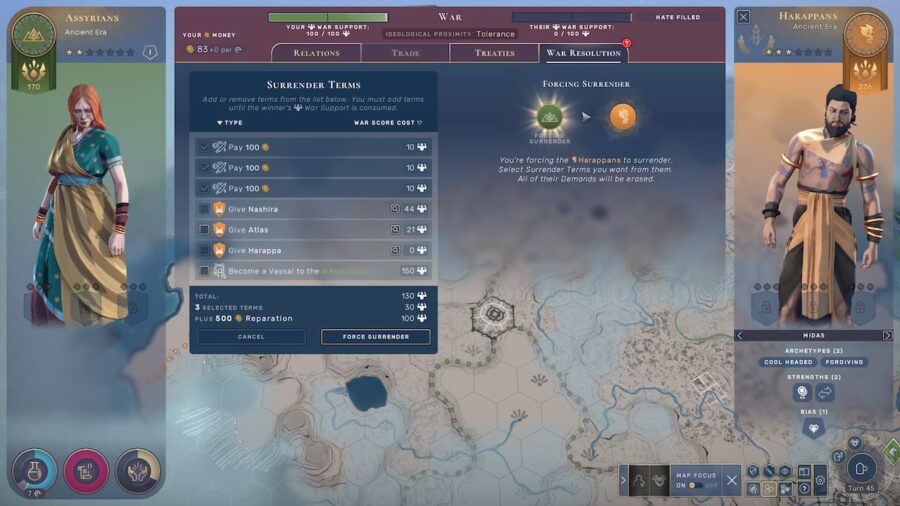 War is an ever-constant threat in Humankind. As hard as you try to prevent it, it is bound to happen as you interact with more and more empires. Even the most peaceful empires should be prepared for this inevitability.

There are multiple ways that war can end in Humankind. This can be done peacefully or through a show of force and military might. Those with the strongest armies and great determination can force another empire to surrender.

Related: How to get rid of a city in Humankind

The only way to force another empire to surrender is to reduce their war support to zero percent. War Support is constantly fluctuating both in and out of war as you interact with other empires. The easiest way to reduce an empire's War Support to zero percent is to constantly defeat their armies and take their cities. You will need a strong army and strategy to successfully do this.

Forcing a surrender allows you the best possible spoilers of war. With zero War Support, that empire will have no choice but to accept your terms. This allows you to spend your War Support to force the surrendering empire to pay your demands, give up cities, or become a vassal nation under you. Once the force surrender option has been selected, both empire's War Support will be set to zero percent and they can resume diplomatic relations.

For more information on Humankind, check out How to patronage Independent People in Humankind and How to claim or build a wonder in Humankind on Pro Game Guides.