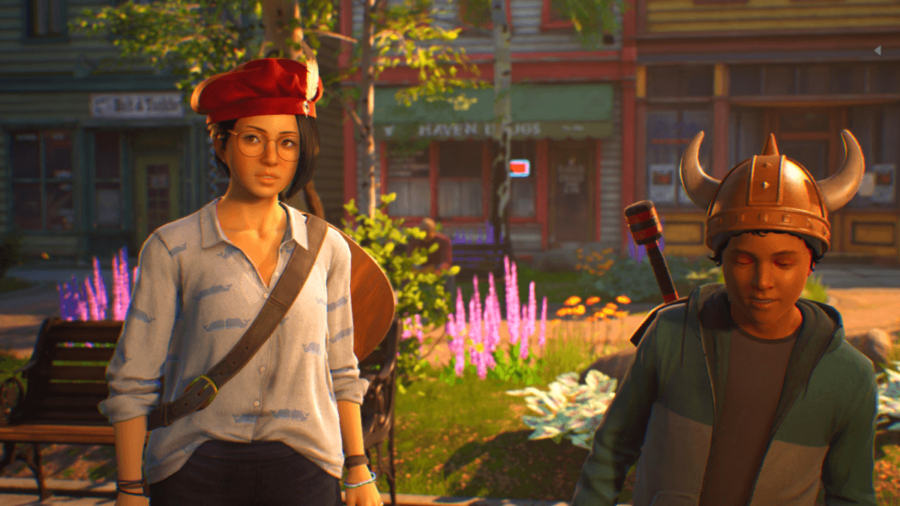 Life is Strange: True Colors doesn't let up in the feelings department, and Episode 3: Monster or Mortal provides even more emotions to contend with! It is, however, in large part a very lovely chapter of the game with more collectibles for you to grab. So, here are the memories in Chapter 3!

At the beginning of the episode you will be on shift at The Black Lantern. Make sure to check for the memory before going back to Steph and Ryan when Diane comes in. If you start the mission with them then you will miss the memory. Head to the back of the bar where the restrooms are to find a Bomber Jacket you can get a memory from.

Interacting with it will get you the Hell Divers trophy/achievement.

This memory will occur during the LARP with Ethan. When exiting the park you will battle with Ryan, afterwards he will drop a Dollar as loot. Pick it up to have the trophy unlock.

Note: For a few people the dollar doesn't spawn in after the battle. If this is the case then continue the LARP in Haven Springs but return to the park to find the dollar. Do it before the battle with the Troll (the last gem), otherwise a cutscene will ensue once back at the park.

Interacting with the dollar will activate the Ethan's Dollar trophy/achievement.

Related: All Memories in Life is Strange: True Colors Chapter 2

Outside The Black Lantern - Appointment Slip

After leaving the park you will head to The Black Lantern (for the time being known as Gullweather's Tavern) for the next stage of the LARP. In front of the entrance to the Right you will find an Appointment Slip on the floor. It is right next to the doorway, to the left of the "take heed" poster.

Interacting with this will unlock the And How Does That Make You Feel trophy/achievement.

Once inside the Tavern a cutscene will ensue. After, you can search the bar for LARP related items. Head towards the second half of the bar near the back where you find Mac in Chapter 1. To the Left of the dartboard on the second table will be an Old Paper. Tune into it to unlock the memory.

Interacting with it will get you the Upright and Above Ground trophy/achievement.

You will remember Valkyrie the cat from the Rocky Mountain Record Traders in Episode 1, where she was sat on the holds list. It is in the temporarily renamed Magpie Emporium that you will encounter the second gem as well. Upon entering, look to the Left near the framed guitar that is lit in blue lighting. On the floor you will see Valkyrie's Dish.

Interacting with the dish will get you the Valkyrie's Dish trophy/achievement.

That's all five collectibles for Chapter 3! Want to know about the upcoming DLC for True Colors? Check out when the Wavelengths add-on is going to be released.

All Memories in Life is Strange: True Colors Chapter 4

All Memories in Life is Strange: True Colors Chapter 1

How to Save in Life is Strange: True Colors

How to romance Ryan in Life is Strange: True Colors

All Memories in Life is Strange: True Colors Chapter 5