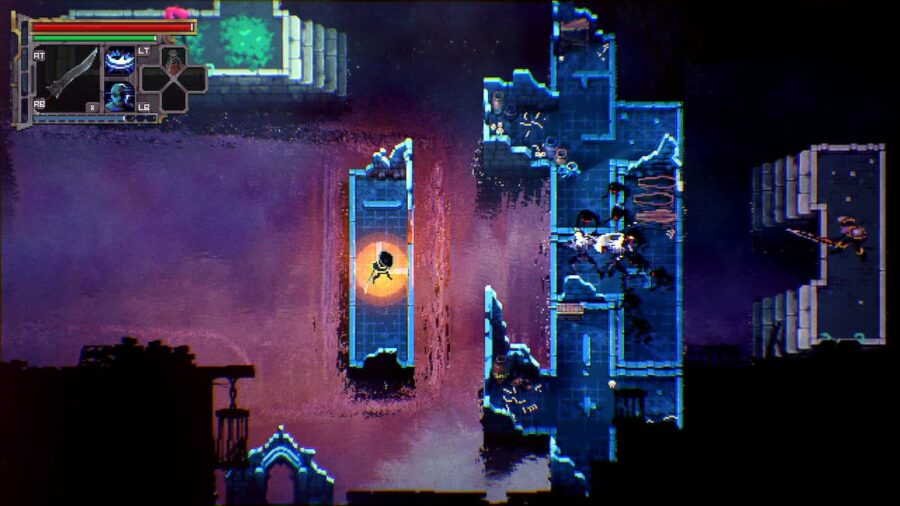 Sometimes, at the end of an uneventful day, you want to challenge yourself and see tangible proof of your improvement. Roguelike games are an excellent method of achieving this validation due to their high difficulty levels that players cannot easily master. Completing roguelike games requires a sense of perseverance, and it is fulfilling to witness this progress digitally, especially when real-life events feel unsatisfying. Below we have the eight best roguelike games on Xbox Game Pass.

Dead Cells is regarded as one of the pillars of the roguelike genre due to its crisp gameplay loop. Despite the grueling nature of Dead Cells, the end of each run always pulls you back for more. This game is a great introduction to the roguelike genre and can help you decide whether you're interested in trying similar games.

Nowhere Prophet is a roguelike with card battles and a striking art style. The game takes place in a post-apocalyptic wasteland, with characters who are just trying to make it to the next day. The game's mechanics are brutal, featuring permadeath and a challenging fight for survival. Nowhere Prophet also features procedurally generated maps, making every run feel fresh.

Darkest Dungeon is a roguelike side-scroller with a dark and lovely aesthetic. The game takes inspiration from Victorian Gothic sources and creates a tense atmosphere with its colors. Each adventurer is vulnerable to permadeath, forcing you to take heavy risks for great rewards. Darkest Dungeon also implements strategy elements in its turn-based combat system, making victories feel well-earned.

One Step From Eden is a deckbuilding roguelike that requires you to think fast and dodge faster. The game is exhilarating to play, as the outcome of fights can change in an instant. All it takes is one overlooked projectile, and you are back to square one. However, this high-energy gameplay prompts you to try again, and again, and again until your execution is nothing less than perfect.

Loot River is a roguelike that provides procedurally generated labyrinths for you to explore. Loot River employs mechanics from several genres, including strategy games, puzzle games, and dungeon crawlers. Although it is a relatively brief game, Loot River offers a unique art style and experimental mechanics.

Dreamscaper is a one-of-a-kind roguelike about the oddities of lucid dreaming. In the game, you can shift between the waking and sleeping world, using hack-and-slash combat to eliminate evil. Dreamscaper has surreal elements and features a breathtaking art style that we cannot get enough of. If you're looking for a fresh and original roguelike, you should definitely try Dreamscaper.

Related: Is Cult of the Lamb a roguelike?

Spelunky 2 is a hilariously unforgiving roguelike game with randomized challenges. One of the best parts of Spelunky 2 is how easy it is to die due to an excessive number of threats. After a while, dying becomes less frustrating and more comical, as a falling cape or unfortunately placed elevator can be as deadly as traditional enemies.

Dicey Dungeons is a lighthearted game where you must escape an ever-changing dungeon as a measly pair of dice with legs. The game has deckbuilding elements and features card battles against adorable enemies. Dicey Dungeons, at its core, is an incredibly fun game. The colors are fun, the character designs have ridiculous proportions, and you play as a pair of dice with funky little legs.