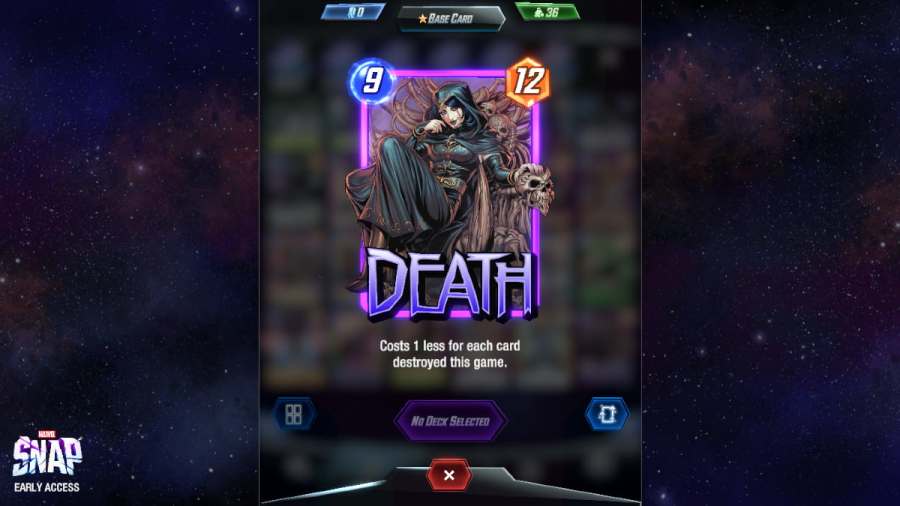 In Marvel Snap, two Featured Locations appear weekly, one for most of every Sunday and the other on Tuesdays and extending into Wednesdays. This week's Featured Location is a brand-new one called Altar of Death, and players are scrambling to figure out the best cards to use while this location still appears in 60% of matches.

What is the Altar of Death location in Marvel Snap?

The Altar of Death is a location that destroys any cards played at it and rewards the player with two Energy on the following turn. This is certainly a tradeoff, as it requires you to waste your Energy throwing cards into it to get Energy in return, netting no Power at the location in the process. This makes the location at first feel like the location Death's Domain with an upside or a permanent Vormir location, but in reality, there are plenty of cards that benefit greatly from playing into Altar of Death.

What cards work best with Altar of Death?

Many cards with abilities with Marvel Snap's Destroy keyword are great in Altar of Death. For starters, if you are running Deadpool, who, after being destroyed, returns to your hand with double the power, you can pay one Energy each turn to throw Deadpool into the location, netting two Energy and a doubled-up Deadpool for free.

Along with Deadpool, Wolverine, Sabretooth, Hood, and especially Bucky Barnes can all be thrown into the Altar of Death for a major upside. With Wolverine, you pay two Energy and get it right back while spawning Wolverine at a random location. Sabretooth loses one Energy in the deal but becomes free for the rest of the game, allowing you to replay him into Altar of Death multiple times, or you can play him for free somewhere else. Hood will give you a Demon in hand while getting rid of his negatively-statted body and netting you one energy. Finally, Bucky will go even on Energy while spawning a six Power card at the location, potentially winning it by himself.

Electro is another great card to throw into this location. Electro gives you one extra Energy On Reveal for the rest of the game but has an Ongoing effect that you can only play one card a turn. However, if you throw him into the Altar, you get that one extra Energy plus two more the following turn and get rid of that pesky Ongoing effect all at once.

If you have Knull or Death in your collection, they are probably the best cards to play while this location is active, as Knull has Power equal to all cards destroyed during the game, and Death will become cheaper in cost for each destroyed card. Thus, as you and your opponent play cards into the Altar and destroy them in other ways, Knull and Death gradually become more and more powerful

On a final note, it is also good to simply play low Power, high-value cards into the Altar, such as Iron Heart or Black Widow. If it helps to even out your Energy curve and it doesn't hurt your overall Power too much, it is not a bad play to throw any card into the Altar, so keep that in mind.

Related: How to build a Mr. Negative deck in Marvel Snap

What cards counter Altar of Death in Marvel Snap?

For those looking to stop their opponent from taking advantage of the Altar of Death, some cards can shut down the strategy completely. For example, all location-changing cards, such as Scarlet Witch, Rhino, Storm, and Magik, will simply eliminate the Altar, allowing you to play your game and potentially shut down your opponent's strategy.

Squirrel Girl, Mr. Sinister, Brood, Captain Marvel, Vision, and Dr. Doom do not necessarily counter the Altar of Death, but instead can get Power into the location either through spawning extra bodies in the location or moving into it using their abilities.

Mr. Fantastic and Klaw are like the above cards as they are good into Altar of Death but do not directly counter it. However, they can force Power into the location through their Ongoing abilities, which each grant Power to other locations and can easily win the Altar.