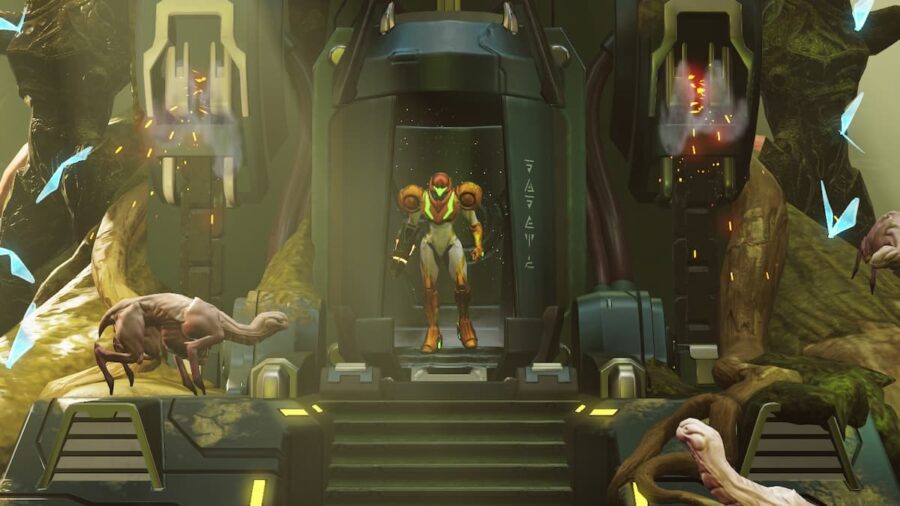 Usually, you kill the Kraid not long after you get the Varia Suit, as you go through some heated areas that will kill you swiftly if you do not have this suit. But, it seems you can get the Grapple Beam and Bombs early and give Kraid a gruesome death during his second phase.

To do this, once you have the Varia Suit, head to Darian and enter a room with lava beneath you. So make sure you have a few energy tanks, and go save at the save location just to the west of this room below.

Typically, you would come to this room when you have the Gravity Suit and the Screw Attack, which makes this room easy, but you will have neither of these. You need to slide under the gap, jump at the last second and angle to the left, then slide down the wall a bit, then wall jump to the right and grab the ledge at the top.

It's easier enough to do, but you need patience, as due to your health, you will only have one-two trips into the lava at best before you die. The next part is the hardest.

Once you've managed to wall jump successfully, you need to roll until you see a gap. Here you need to do a slide jump to make it across.

After you're across, enter the next room, shoot the wall in front of you, and head onto the elevator to take you to Artaria. Follow the path to the Grapple Beam.

Now backtrack to Dairon, head go through the same way you came in, but you've got a safe path at the to Morph Ball into. You can save now if you want to be safe, and you'll always have the Grapple Beam. You're heading in that direction anyway.

Follow the game, as usual, go left from the save room into the EMMI room, turn back on the power, and head up to the Bomb room. Now, make your way back through Cataris to Kraid the normal way.

During Kraids second phase—when you are fighting the creatures coming out of his belly, bomb the hidden bomb block to the left corner of the screen, and you'll see a Morph Ball Launcher. Go into it, drop a bomb and you'll fire into Kraids belly, and just keep mashing Y dropping those bombs!

What to do with Unknown Resources in Metroid Dread

Where to Get the Charge Beam in Metroid Dread

Where to go after getting the Phantom Cloak in Metroid Dread