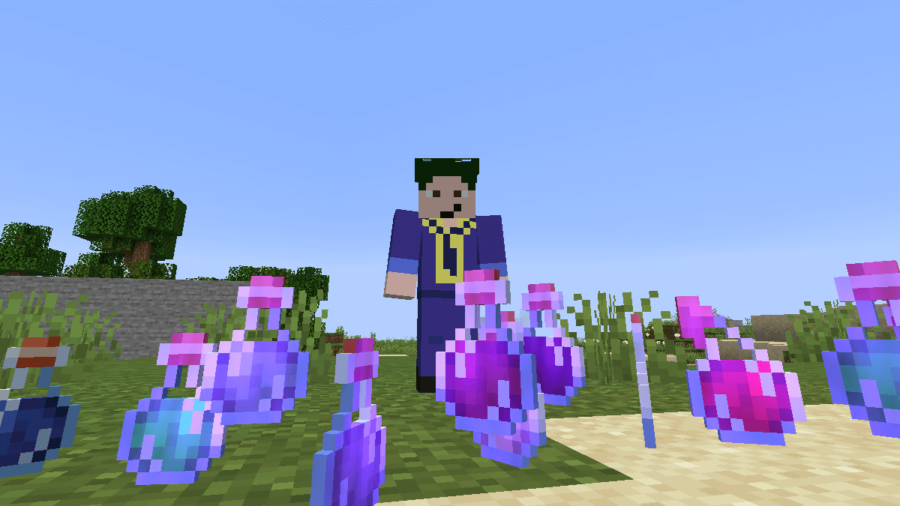 Potions have been in Minecraft since almost the beginning. They were obtainable in game during Beta and have changed a lot over time. However, we've done the math and the research, and have come up with the list of what we consider to be the best potions currently available.

Before we begin, it's important to mention a few things. Our list does not contain only the strongest potions in Minecraft, it contains (what we consider to be) the best. Lingering potions are strong, no doubt, but when you consider the cost of labor and time when pursuing them, it's a hot debate on whether or not they're worth it. That being said, you won't see them on this list.

We're also not going to strictly tell you the best potions for PVP battles. We like to think this list represents essential potions to carry on your character to help you in most normal Minecraft Survival situations.

Ah, the classic. What is there to say? It's been there for us since the beginning. Out of all potions, it is the one that is most frequently in someone's inventory. It's good for exploration, PVP, bosses, and just about any situation. It not only heals your character physically, it's also almost comforting to have. It has made it through the years as an essential, and no one has gotten tired of it. The most round-a-bout convenience to keep you on your feet. It also damages undead enemies! What is there to hate about it?

Related: How to make a potion of slow falling in Minecraft - Pro Game Guides

We know, we know. You started this list thinking the best potions would be the ones that make you fast and strong. How dare we say slowing you down is best! Think about it, though. The Potion of Slow Falling +  is helpful in almost as many situations as Healing II. Whether you need to make a long leap over a ravine, fall a great distance, escape from a mob of enemies, or simply want to look cool by landing a headshot on a skeleton in mid-air. It last four minutes, which is just long enough for a dodgey getaway, if necessary.

Fire Resistance is, without a doubt, one of the most vital status effects to have if you venture into the Nether. Even veteran Minecraft players make mistakes in the Nether. Whether you're falling into a pit of lava, accidentally backing onto a burning Netherrack, or finding yourself squaring off with a Blaze, having fire resistance could be the difference between life and death. It protects you fromPVP battles (those pesky flint and steel spammers) and mining. After it was implemented into the game, it quickly made it to the top of the list of most useful potions, and it stayed there.

The Potion of Invisibility + is another all-around convenient tool. You can use it to play pranks on your friends in their Minecraft home. You can use it to spy on your enemies. You can even use it to hide from hostile mobs if you're far enough away. Anything you're wearing or holding does not become invisible with you, though, so be sure to fix that if you plan on using it!

As it was mentioned up above, this is speculation. We wanted to provide you a list of the best potions based on several factors like versatility, how easy it is to make, and how often the effects of each potion would be helpful. Ultimately, the best potions to have are the ones that best fit your play style. If you're an aggressive fighter, grab some Speed Potions and Strength Potions. If you like to go fishing in the ocean a lot, grab some Potion of Underwater Breathing and Nightvision Potions. However, if you're playing Survival for the thrill of it, these four potions will be your best friends.

If you want more information on potions in Minecraft, Pro Game Guides has that for you! Check out how to make splash potions!