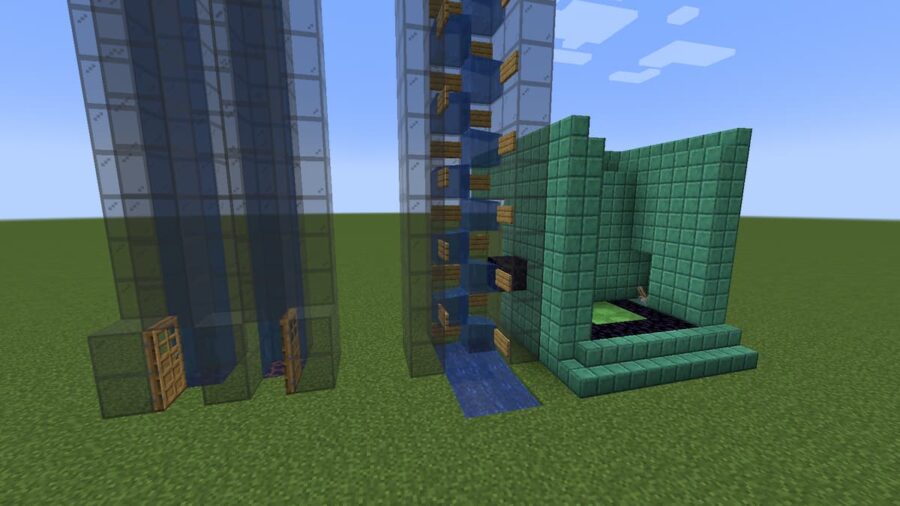 Elevators are one of the more essential features in advanced Minecraft builds. Going up and down quickly is crucial in a game where you dig giant mine shafts and build massive structures. But if an elevator isn’t fast, then what’s the point?

That’s why we’ve listed some of the fastest elevator designs in Minecraft. What’s more, the use of Redstone in these designs is incredibly minimal, making them simple to make!

Why no Redstone elevators?

Redstone elevators are slow. The reason for this is because of game ticks. Minecraft has ticks that occur 20 times each second. During a tick, mobs and objects move, blocks shift, and Redstone functions happen.

It’s usually only possible for a block to move a single space per tick using Redstone contraptions. This means the maximum speed of a Redstone elevator is 20 blocks per second. Water elevators, slime bounce designs, and physics-based elevators ignore these constraints. That’s because you can fall, be launched, and fly faster than 20 blocks a second.

One of the fastest ways to make an elevator is with Soul Sand, Kelp, and Water. Immersing Soul Sand in water creates a bubble column that shoots any entity moving into the bubble stream upwards.

To build this, simply head to the top of the point you want to, drop the water into your elevator shaft, and then head back to the bottom. Plant Kelp all the way up, and then head back to the bottom once more. Break the Kelp, which will turn all the above water blocks into water source blocks. Then place either a Soul Sand or a Magma block at the bottom to create either an up elevator or down elevator, respectively.

Related: How to Make a Minecraft Water Elevator

Gravity and physics are simply faster than most mechanical designs in Minecraft. So the best way to move between two points is often being launched or bounced by Slime blocks. Or using Slime blocks to mitigate damage.

You can fall from any height and land on a Slime block and not take damage. Just make sure you don’t press the crouch button! That will cause the Slime block to not function, and you’ll take full damage.

As for going up, you can use pistons to push slime blocks to catapult you upwards. Slime won’t adhere to Obsidian so that you can use Obsidian Blocks as a frame. Since the bounce is limited, you can trigger multiple pistons as you ascend using Observers.

One of the fastest but most dangerous ways to catapult yourself is using TNT cannons. The damaging aspect of the TNT can be almost entirely mitigated using water, but it’s still hazardous. Therefore, it’s best to pack a suit of Blast Protection Armor when using this method.

For more Minecraft build ideas, check out How to Make and Use a Painting in Minecraft – Painting Door & Custom Painting! on Pro Game Guides.