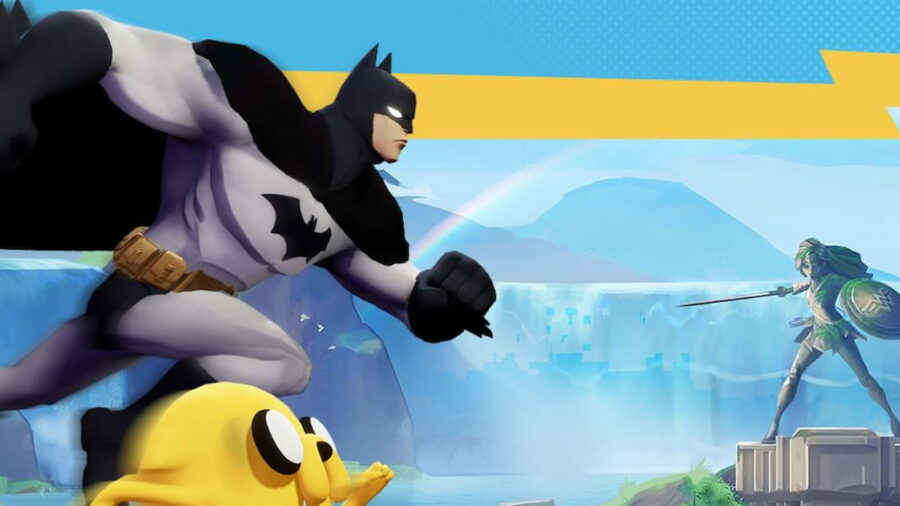 Lebron James has arrived! He is our first basketball-wielding character!

For a LIMITED TIME Gold earned from matches has increased by 25% from 7/26 to 8/8 as an Open Beta Welcome Event!

- Air/Ground Neutral Attack: Cooldown on Batarang increased from 13s to 14s. Pick up of Batarang returns 11.55 second up from 11.05. This means that the minimum time between Batarang throws is 2.45s up from 1.95s.

Batman’s Batarang pick-up cooldown created very small windows where the Batarang wasn’t in play. This change should make it so opponents of Batman have a larger window between Batarang attacks to gain advantage.

Bug Fix: Air/Ground Side Special: Fixed a bug where Grapple would sometimes shoot you off the map.

The hitbox made it so that Bugs Bunny hit nearly all around himself. This should make the up air a bit more reasonable to deal with.

Bug Fix: Air Down Attack: can no longer combo into itself

Bug Fix: Air/Ground Down Special: can no longer repeatedly hit and lock opponents in place forever

Bug Fix: Fixed a bug that was preventing Taz from doing any aerial attacks once he reached his air special limit.

If you have been following early access, Taz’s Tornado has been dominating his character kit and presenting a non-obvious knowledge check for newer players. By reducing its effectiveness we hope to improve his gameplay health and loop and bring the game to a healthier state for newer players.

A decrease to the tornado's duration and the additional duration gained by passing an ally.

Removing one of the multi-hits of the tornado.

Decreasing the hit pause of all the hits in the tornado.

Reduced knockback from the final hit in the tornado from 1375 to 1275.

Right now, our plan is to transition the Tornado to a cooldown move in an upcoming patch. The tornado is Taz's signature move so we want to keep it as one of his most powerful attacks, with the cooldown forcing more intentional use of it. These nerfs will reduce Taz's strength, especially at higher levels of play, so expect some buffs to the other moves in his kit in the near future. Thank you for your patience and we will continue to evaluate Taz’s gameplay health.

It was an oversight on our part that Velma is one of the heaviest characters in the game. This change should bring her more in-line with where we originally envisioned her.

Iron Giant has arrived! He is our very first Colossal-sized character!

You no longer get a Double Jump after Wall Jumping.

For every 0.5 seconds of wall sliding or every time you touch a wall, you lose Dodge Meter.

A Glossary of MultiVersus terms has been added to the main menu.

Invincibility frames are removed when canceling a dodge into an attack unless the dodge successfully dodges an attack.

Hitting an ally with Arya's dagger has a longer cooldown, but the ally is given an enraged buff. If Arya dashes to a dagger on an ally, she enrages herself.

Lingering Love was forcing opponents to permanently alter the way they played against Bugs Bunny and felt too oppressive.

We want players to experiment with tying Frost Breath and Ice stacks into their gameplay!

Taz - REMOVED - Right Back At You

Many perks have been renamed.

Break armor at 75% charge if your ally also selects this perk.

No longer charges without grounded movement.

- More recovery when whiffed to allow for a slightly larger punish window.

+ Aerial and Grounded Down Special: Cooldown reduced from 20s to 18s.

This is to give Arya a bit more access to armor pierce as the match progresses.

+ Grounded Up Attack: Has earlier on-hit cancel frames to allow it to combo more reliably.

- Side Air Attack: Hitbox was shrunk to better match the attack animation.

- Grounded Side Attack 1: More whiff recovery to give the attack a bit more risk for its reward.

The goal of these changes are to give Batman earned ring-out power and additional team utility. Giving a number of different attacks and combo routes that give Batman the ability to stack and maintain Weaken Debuff on the enemy.

+ Aerial and Grounded Side Special: Grapple can now be canceled out of using Jump or Dodge.

This should give Batman additional outplay options and give him some team utility that he was lacking previously.

+ Grounded Down Special: While in smoke Batman and allies ignore enemy projectiles.

This should help Batman with a bit more team utility.

+ Up Air Attack 2: Applies one stack of Weaken debuff.

+ Side Air Attack 2: Applies one stack of Weaken debuff.

+ Grounded Up Attack: Applies one stack of Weaken debuff.

- Aerial and Grounded Down Special: When exiting from Tunnels Bugs Bunny and allies’ invincibility frames have been reduced.

- Aerial and Grounded Neutral Special: Bugs Bunny and allies do damage to the Safe when attacking it.

The Safe could stay on the map for too long so we decided ally attacks can also damage the safe, reducing how long the safe stays out overall. This should provide more opportunities and openings for the enemy team to play around.

- Side Air Attack: Has more whiff recovery to allow it to be more punishable.

The goal of these changes are to reduce the easily achievable blazing movement speed Finn has access to.

+ Hit 1 and 2 chain together more reliably

+ Aerial and Grounded Up Special: Hitboxes now connect into each other more consistently.

- Grounded Down Special: Boots of Speed now gives 10% increased movement speed on first purchase, 5% on the second stack and 3% movement on each subsequent stack, reduced from flat 10% on all stacks. It is now capped at 10 stacks reduced from unlimited stacking.

~ Down Air Special: Crystal now counts as a projectile for perk application

- Aerial and Grounded Neutral Special: has additional start up time before it becomes active

Previously the projectile slow would be active on frame 1 which made projectiles nearly useless against an aware Garnet.

- Side Air Attack 1: Takes a bit longer before it can be landing canceled.

- Side Air Attack 2: Added additional whiff recovery to give a larger window where the attack can be punished on misses.

+ The Bomb will now pierce armor.

+ Harley Bomb Equip no longer counts as an Air Special use.

- Harley Bat Bomb will detonate after 6 seconds even when attached.

This is to prevent how oppresive the bomb could be when attached to Harley. It would cause all approaches to Harley to be unfavorable.

Bug Fix: Fixed an issue where the bomb would disappear when attached to a player that goes to the edge of the blastbox.

- Neutral Air Attack: Has more whiff recovery to prevent it from being a very strong and safe option for Harley.

~ Aerial and Grounded Side Special:

+ Can cancel on hit earlier to allow it to more reliably combo.

- Initial Movement speed slowed from 2x to 1.5 to give more time for opponents to react.

+ Up Air Attack: Can cancel on hit earlier to allow it to more reliably combo.

+ Grounded Up Attack: Can cancel on hit earlier to allow it to more reliably combo.

+ Grounded Down Attack: Can cancel on hit earlier to allow it to more reliably combo.

+ Grounded Neutral Attack: Can cancel on hit earlier to allow it to more reliably combo.

- Side Air Attack: Jake's stretch punch distance is now based on charge time. The sweet spot on the attack will only apply if charged for a long enough time.

+ Grounded Side Special: Can be canceled immediately on hit.

+ Up Air Attack: Multi-hit will combo a bit more reliably.

+ Grounded Down Attack: Has faster startup.

+ Passive: Shaggy now starts with a Sandwich with each life.

+ Down Air Special: Has armor when starting descent.

+ Grounded Up Attack: Has earlier on hit cancel frames and knockback pushes the opponent up and forward to help Shaggy follow up and combo.

+ Grounded Down Attack: has faster startup.

Bubbled opponents have more control in the air while bubbled.

Bubbled opponents have more control over their movement while in the bubble.

~ Grounded Down Attack: Has armor removed from the attack, but will now break armor.

+ Aerial and Grounded Down Special: Laser has longer range and now applies projectile debuffs from perks on knockback.

+ Grounded Side Attack: The jab combo will chain together more reliably.

+ General Change: Many of Taz’s attacks will retain velocity when branching into other attacks making his movement less clunky.

- Aerial and Grounded Side Special: Additional commitment before you can cancel out of this attack.

- Aerial and Grounded Down Special: Has ammo to reduce Taz’s zoning effectiveness

- Side Air Special: Taz can no longer turn and change direction of the knockback.

This was leading to really unearned feeling reversals, where Taz’s opponent would knock Taz off platform and try to follow up only to be reversed.

The goal of these changes are to bring some more risk to the really large reward Tom and Jerry have.Tom and Jerry didn’t have enough risks and his close range attacks were a bit too safe.

- Neutral Dodge: Projectile Shield will only turn on if Velma has Dodge Meter.

- Reduced Weaken debuff stacks from 5 to 3 on hit.

Bug Fix: Can no longer cancel during startup.

- Grounded Up Special: Increased cooldown from 14s to 28s.

- Grounded Side Special: Velma is now only able to cancel the grapple with Grounded Up Attack.

Wonder Woman speed was causing her to be more oppressive than we intended.

- Aerial and Grounded Neutral Special: Cooldown increased from 8 to 13 seconds.

Lasso was available too frequently and made Wonder Woman oppressive to fight against.

- Side Air Special: Movement distance can no longer be controlled to make the attack more committal.

Bug Fix: Grounded Down Attack hitbox is now more in line with the visuals.

For more information on MultiVersus, check out Is MultiVersus Free to Play? and How to check MultiVersus server status on Pro Game Guides.