The long awaited battle pass for Apex Legends has been officially announced! It's called Wild Frontier, and it will set you back 950 Apex Coins or 2,800 Apex Coins for the bundle that includes an unlock for the first 25 levels instantly. There's 100 levels and each level unlocked rewards you with an exclusive cosmetic reward! 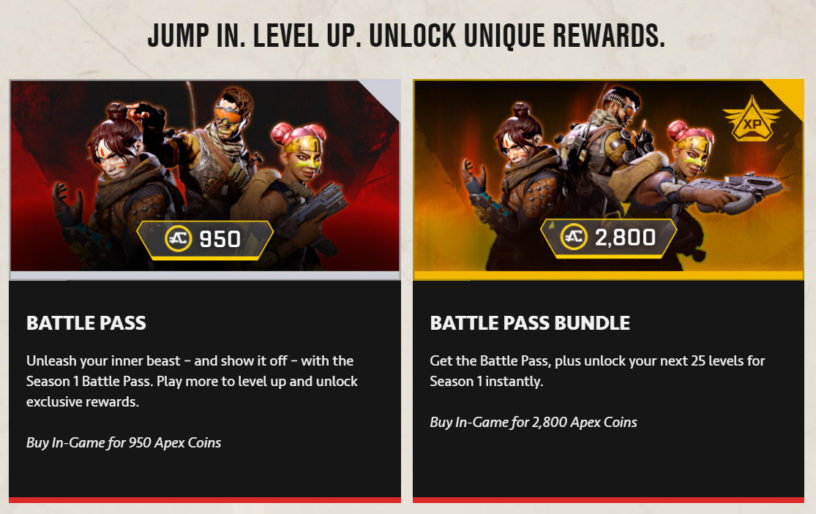 HOW DOES THE BATTLE PASS WORK?

Instantly unlock the Lifeline Revolutionary skin, the Wraith Survivor skin, and the Mirage Outlaw skin with purchase of the Battle Pass.

How do I buy the Battle Pass?

What happens if I buy my Battle Pass late in the season?

You’ll receive all the rewards up to your Battle Pass level (which is your current level for the season) retroactively! For example, if you’re on level 20 for the season when you buy the Battle Pass, you’ll unlock all rewards for every level up to 20, plus three special Battle Pass skins.

Can I keep leveling my Season 1 Battle Pass after the season ends?

No, the rewards available in the Season 1 Battle Pass can only be earned until the season is over. After it ends, you won’t be able to earn new Wild Frontier content.

Do I keep my stuff after the season ends?

Yes! You keep every Battle Pass reward you’ve unlocked after the season is over.

What if I don’t buy the Battle Pass? Can I still earn rewards for free?

Yes. Even if you don’t purchase the Battle Pass, you can still earn the following items for free:

If I buy the Battle Pass, can I also get the free rewards?

Yes! Everyone can earn the free rewards during Season 1.