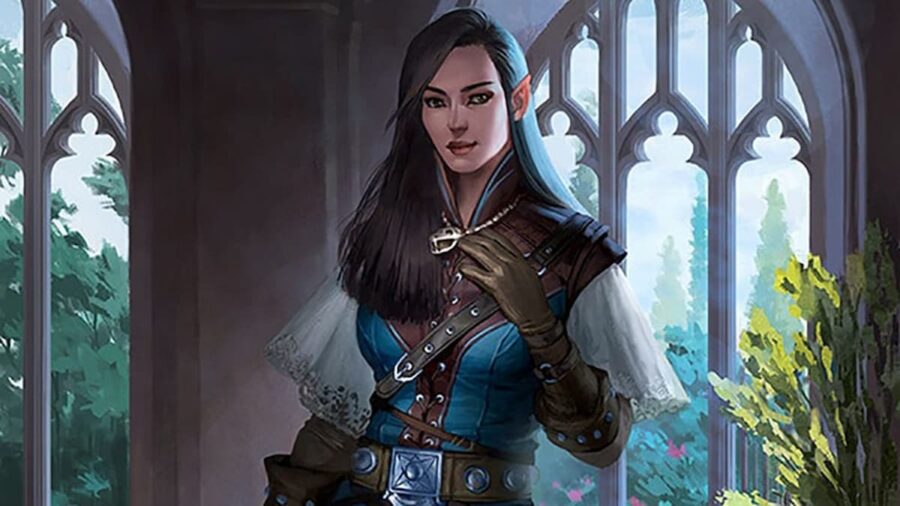 As a Spirit Hunter Camellia can be a powerful fighter with a knack for fighting spirit foes. She is a bit of a glass cannon at the start of the game, but players can beef her up as their companion and either make her more of a support role or a heavy damage dealer instead. Either way, Camellia will need to be built up in order to survive the world as the player's companion.

Camellia doesn't start with the best of stats, however, players can use them to their advantage in certain situations. She is the Spirit Hunter subclass of Shaman with her high stats being in Dexterity and Wisdom. This makes her automatically good with finesse weapons. Then her Skill Focus is on Trickery, making her good at lockpicking and disarming traps along with other more roleplay options.

With this build style already in mind, she has a lot of variety that players can choose from for her. Depending on what sort of role she is needed to play within the group, this flexibility can make her incredibly useful as a companion. It also makes her character the perfect option for multiclassing.

As a Spirit Hunter, Camellia mainly focuses on debuffing and damaging enemies with her spirit weapon. These both make her character a deadly foe and a weak enemy. Players won't want to keep her in the fray for long, but her high Dexterity, 19, will help her stay in the game. Here are the abilities Spirit Hunters receive within the game.

Unlike the other Shaman subclasses, the Spirit Hunter doesn't have a Spirit Companion, instead, their spirit is bonded with a weapon. The biggest aspect of this class is what Spirit type they have bonded with. Camellia automatically starts with the Battle spirit. The main choices however lie in which Hexes players pick.

The best options here for this build, in particular, to choose from are Misfortune, Ward, Cackle, and Evil Eye. Misfortune and Evil Eye do similar things, causing a target to take a disadvantage with Misfortune or a -2 to a specific roll type with Evil Eye. Ward offers a +2 to deflection on AC and resistance. Lastly, Cackle will extend the duration of hexed enemies within 30 feet.

To play to Camellia's present and preset strengths, the best option is to multiclass her into something that fits her stats well. Her starting class focuses mainly on debuffing the enemies with Hex and enchanting her weapon with the spirits that she hunts. Players should round out her character with the second class they choose. With a higher Dexterity than Wisdom, the best option is to multiclass into Rogue and eventually take either the Eldritch Scoundrel or Sylvan Trickster subclass.

Adding the Rogue class to her initial Spirit Hunter will allow players to get more critical hits and enjoy some stealth to keep her alive for longer in more dangerous areas. Players can also choose a subclass within the Rogue that will affect her abilities as well. The main two that would work well for her base playstyle are Eldritch Scoundrel and Knife Master, however, alternatively, the player could try to build their way to the prestige class Arcane Trickster.

Related: Should you help or let Telmer die in Pathfinder: Wrath of the Righteous?

The Eldritch Scoundrel subclass of rogue will grant the player access to wizard spells from cantrip to level six and the Detect Magic ability. These are in exchange for less sneak attack damage, less rogue talent, and absolutely no Uncanny Dodge. It is the only good option that will enable players to eventually reach the prestige class of Arcane Trickster. However, the trade-off for fewer sneak attacks may defeat the point of multiclassing in rogue for some players.

In order to gain the prestige Arcane Trickster class, players will need to qualify with four Trickery, four Mobility, two Sneak Attack levels, second-level spells, and four points in Knowledge of arcana. This can be fairly easily achieved from the mix of the two classes and the Eldritch Scoundrel subclass. What will take the longest is the 2nd level spell option. The Arcane Trickster can be well worth the wait, however.

The main perks allow players to access Wizard spells and use Trickery skills at 30 feet, making them good at scouting near the front of the party and unlock areas. Eventually, at level nine players will gain the invisibility option. Making Camellia almost overpowered as she sneaks her way across the battlefield casting spells at distanced enemies and using devastating sneak attacks on those who bring themselves too close to her.

Alternatively, if players don't want to go through the hassle of gaining the prestige class, the Knife Master is another great option. With this subclass, players will be more focused on the stealth and sneak attack damage, creating devastating blows, particularly with daggers, kukri, punching daggers, starknives, and sai. Overall, she'll be trading in her Sneak Stab and Blade Sense for no more Danger Sense and Trapfinding. However, this still won't offer any magic abilities to Camellia.