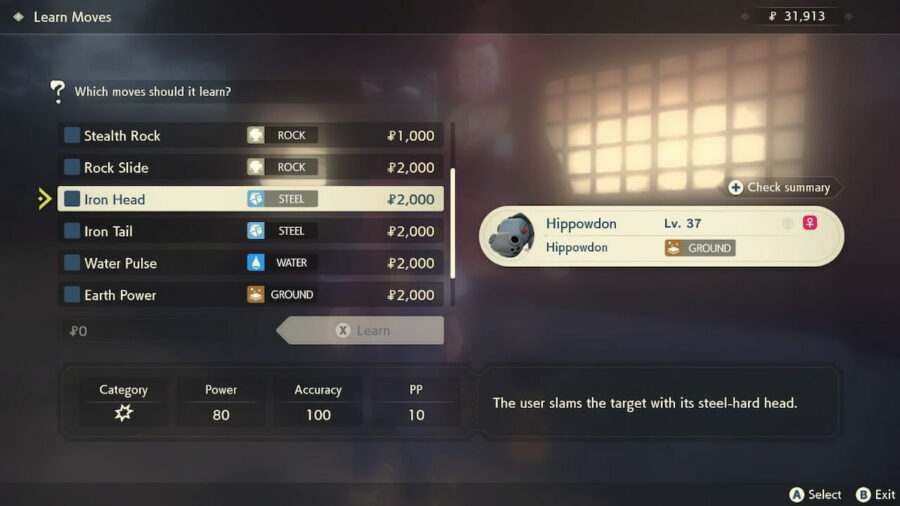 Hippowdon has a powerful offensive and defensive presence as a pure Ground Type. While its Special Defense Stat isn't nearly as high as its Defense, its high HP more than makes up for it. It has the potential of tanking several super effective moves but will almost certainly only need to tank one before taking out any opposing Pokémon with one hit. These are the best moves for Hippowdon in Pokémon Legends: Arceus.

Hippowdon will learn High Horsepower at level 34 (masters at 45), Crunch at level 25 (masters at 35), and both Stone Edge and Fire Fang from Zisu.

How to use Hippowdon best in battle

High Horsepower is Hippowdon's best move to use against anything that doesn't resist it. Water Types that threaten it can be dealt with using Thunder Fang, however, Thunder Fang's super effective damage will only increase to 130 Base Power. High Horsepower, because it is Hippowdon's S.T.A.B. (Same Type Attack Boost) move will have 127.5 Base Power. The point difference is minimal and it is far better to replace Thunder Fang with a different move because of it. Crunch can lower the defensive stats of the target and deals super effective damage against Ghost and Psychic Type Pokémon.

Hippowdon is a beast of a Pokémon and should always be considered for a spot on a team. Its Defensive bulk alone makes it good but its damage capabilities make it great. There should be no fear when fighting a Grass, Water, or Ice Type with this Pokémon as it will make easy work of anything it fights.