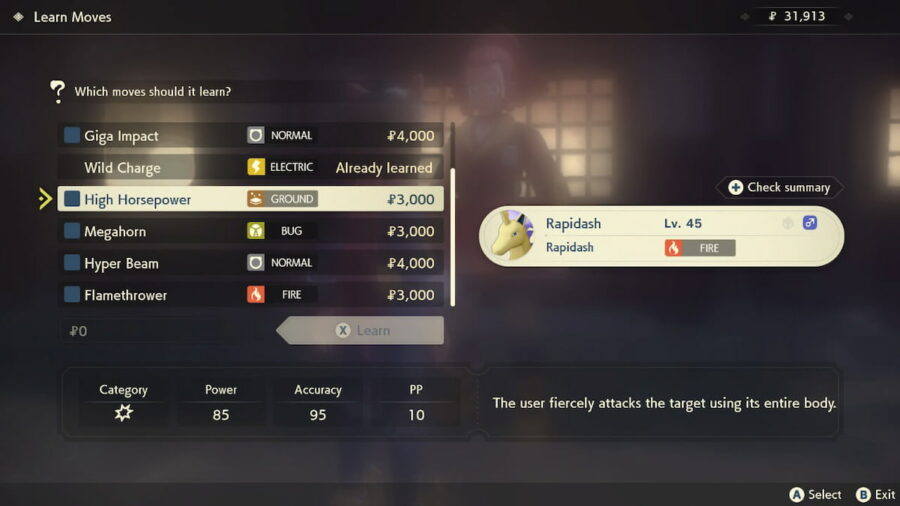 Rapidash is a fairly straightforward Pokémon to use. Being a pure Fire Type, Rapidash has a weakness to Rock, Ground, and Water Type moves. Thankfully it has good Speed and good Attack to respond with super effective moves to anything it may be weak against. Flare Blitz is its strongest S.T.A.B. (Same Type Attack Boost) move and will deal with most Pokémon very easily.

Rapidash will learn Flare Blitz at level 47 (masters at 59) and High Horsepower, Wild Charge, and Iron Tail can all be learned from Zisu.

How to use Rapidash best in battle

Flare Blitz will cause Rapidash to take recoil damage, but its high damage is worth any damage it takes in return. Fire is not resisted by many types, and its other moves will make up for anything it doesn't cover. Fire will deal super effective damage against Grass, Bug, Steel, and Ice Types.

High Horsepower covers against other Fire Type Pokémon and its Strong Style version will make sure it doesn't miss. This move will cover Rock, Steel, Fire, and Electric Type Pokémon. Wild Charge will deal recoil damage as well but is much better than taking a potential Aqua Tail from a Pokémon. This move will provide coverage against Flying and Water Types.

Iron Tail can be swapped out for moves like Giga Impact but it does its job well against what it is strong against. The move has a chance of lowering the defensive stats of the target. Poison Jab has similar coverage but only has coverage for Grass and Fairy Types whereas Iron Tail has coverage for Rock, Ice, and Fairy. with a higher Base Power.

Rapidash's Speed will make sure it moves multiple times in a turn order most of the time, making sure it can take out most threats easily. Keeping it away from strong Rock, Ground, and Water Type Pokémon can be difficult but it can take care of itself with the amount of coverage it has.